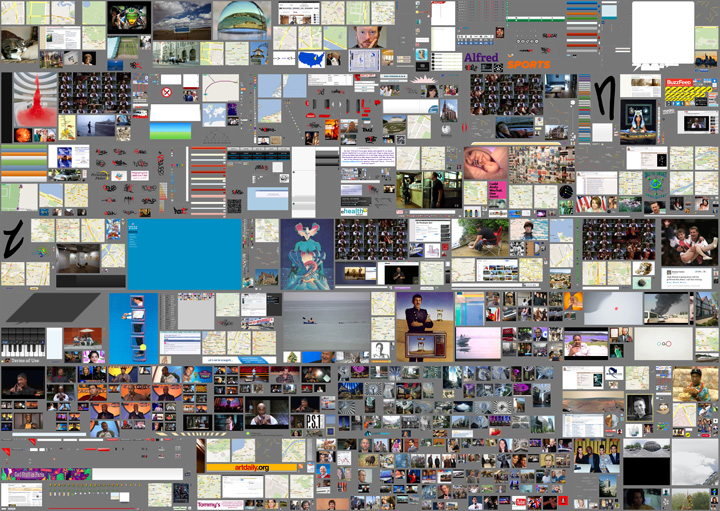 An extraordinary exhibition has just landed on my screen, Collect the WWWorld, albeit a bit too late, and much to my surprise, one of the most ambitious Net efforts I have seen in a very long time (well, maybe not so long, given the Web just turned 20 this month).

Curated by Domenico Quaranta from the Link Center for the Information Age, a net-infused, nomadic, think-tank for the information arts, he has gathered together an impressive consortium of net art, artists and theorists, with essays by Quaranta, Josephnie Bosma, Joanne McNeil, Gene McHugh; and a list of artists that include Ryan Trecartin, Cory Archangel, Natalie Bookchin, Eva and Franco Mattes, et al.

In sum, the show (which concluded last fall at the 319 Scholes in Brooklyn), looks at the current net practice of the artist as archivist, but really, its about how the broader public, particularly the digital natives, have become documentarians of their own database narratives. The show reveals how we are digital hunters and gatherers scavenging the net for entertainment, escapism, art, and critique. And yes, all at once! What was once called surfing the web, is now devouring its contents and appropriating everything in sight, without concern for such arcane notions of copyright, or even privacy for that matter: rather, the Web is a wild frontier for unearthing treasures just for the sake of collecting.

You could say that the Web constitutes the people’s very own Library of Congress. It’s what we do.