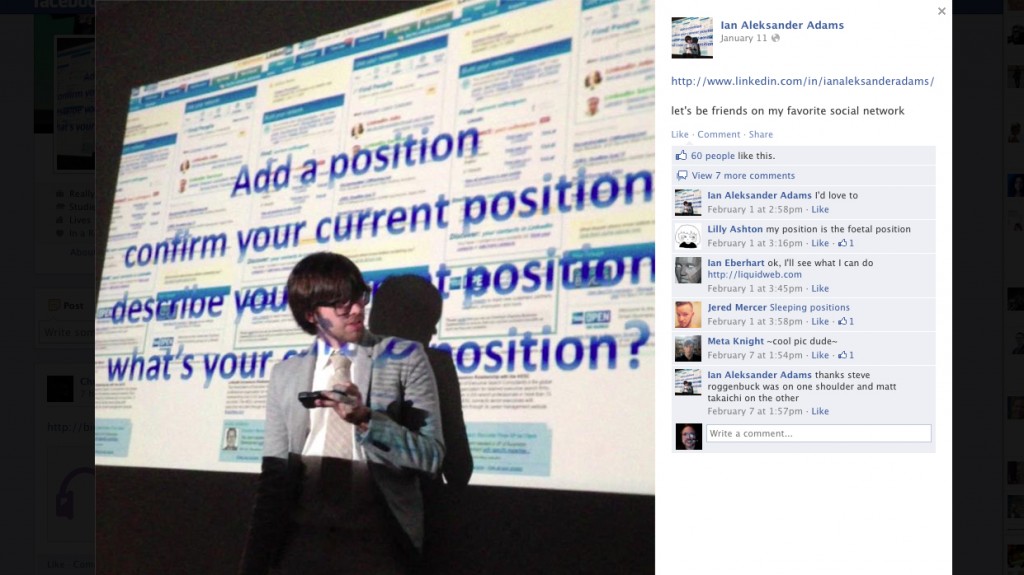 In my total embrace of the post reality, I’ll become a super-participant, an echo chamber for appropriating, amplifying and redirecting information. I’ll absorb the endless stream of mass media and popular culture to reshape them, transform them, remix them, and re-broadcast them back out from wherever they came. – from The Manifesto for the Post Reality by Randall Packer

In what will be just another session of my course, Open Source Studio, net artist/designer/hacker/etc./ Ian Aleksander Adams will be joining us from San Francisco, I’ll be in the studio bunker in Washington, and my students will be connected via their laptops from their apartments in Singapore. This distributed seminar seems perfectly appropriate given Ian’s work as an artist whose work is distributed across the global strata of social media.

In his recent Facebook work, Tumblr Tuesday, no longer online, every new friend became an administrator of the page, and the page was remixed and transformed by its collective community of hacker-friends. According to the artist:

What started as a simple deluge of reblogged images evolved into a participatory recursive performance between multiple Facebook denizens, a flurry of screenshots, UI design, inside jokes and complaining bystanders – all absorbed and png’d for the next tuesday.

Friendster Friday on the other hand, is intended as an archive and screengrab of Tumblr Tuesday (got that?) such that the two sites constituted a kind of feedback loop of endless appropriation and reappropriation. In Ian’s own sarcastically cryptic description:

It’s best experienced at the site, especially if you love filter failure, context without context and extremely great user experiences. You can follow it if you hate yourself.

And like so many digital natives, there is nothing so engaging as pushing media around: information, stories, photos, fragments and pieces of data once compiled, become nothing less than the collective narrative of the zeitgeist of a day or a moment or even a second in time.

And then there is that pesky issue of the demarcation between private and public. For the digital natives, and many of the rest of us immersed in social media, the line has been eradicated. In the construction of our daily database narratives, it is far more interesting to give up your data, as a super-participant, to let it fly through the ether. If no one really has time to look at this raging stream of information, perhaps privacy no longer matters?

Except. When it is scooped up by governments or corporations that would use it for their own ill-conceived purposes, such as Google’s mega-spy project Street View, which supposedly syphoned off passwords and personal information from individual wireless networks as their seemingly friendly vehicles were roaming our neighborhoods.

While we furiously share our data in our intimate collective communities that reach far and wide, there is this dark side to the equation: what if the data falls into the wrong hands? If you believe in the rallying cry that information should be free, do you become disillusioned when you are confronted with the fact that Facebook is making billions from your information that is being freely distributed? Do you stop using Facebook? Do you give up your Twitter feed? Do you kick Tumblr out the door? Do you give up on the promise of social media altogether? In an absurd twist of irony, social media and technology industry moguls produce tools that are founded on the notion of free sharing, while at the same time greedily profit from these tools and techniques, and sometimes like Google, blatantly steal our personal information.