There is nothing so beautifully audacious as the artist mounting a campaign for the Washington DC Ministry of Culture, especially when it takes place in the imaginary realm of performance art. But that is what art is all about, and culture as well: art is not just about dreams, it is about vision, about modeling & testing ideas, it is a catalyst for collective action, it is about making the world a better place.

In this imaginary realm of live performance, unshackled from the regulations of the Federal Election Commission, free from SuperPACS, unfettered by billionaire donors, why be held back by political reality? As an artist, you can reimagine the world as you see it, embed yourself in powerful possibilities of action, thereby bringing the potentiality of the virtual into the space of the real! That is precisely the power of art. Nothing less.

During the 2016 election season, when all eyes were on the epic battle between Hillary & TRUMP, (and unfortunately we all know how that ended up), there was another contest taking place in the nation’s capital, well under the radar of the cable news media. It was here in the nation’s capital that performance artist Sheldon Scott was making a bid for DC Minister of Culture, with Washington Project for the Arts Peter Nesbett serving as his trusted campaign manager.

Now, to be perfectly clear, Sheldon didn’t exactly have any competition, nor did he have any intent whatsoever to situate himself in some cold, bureaucratic government building pushing paper for the people. No this was a campaign free of all that cumbersome reality. This was a campaign about mobilizing people through empowering ideas and their performance: that we the people ARE the culture. Why not? 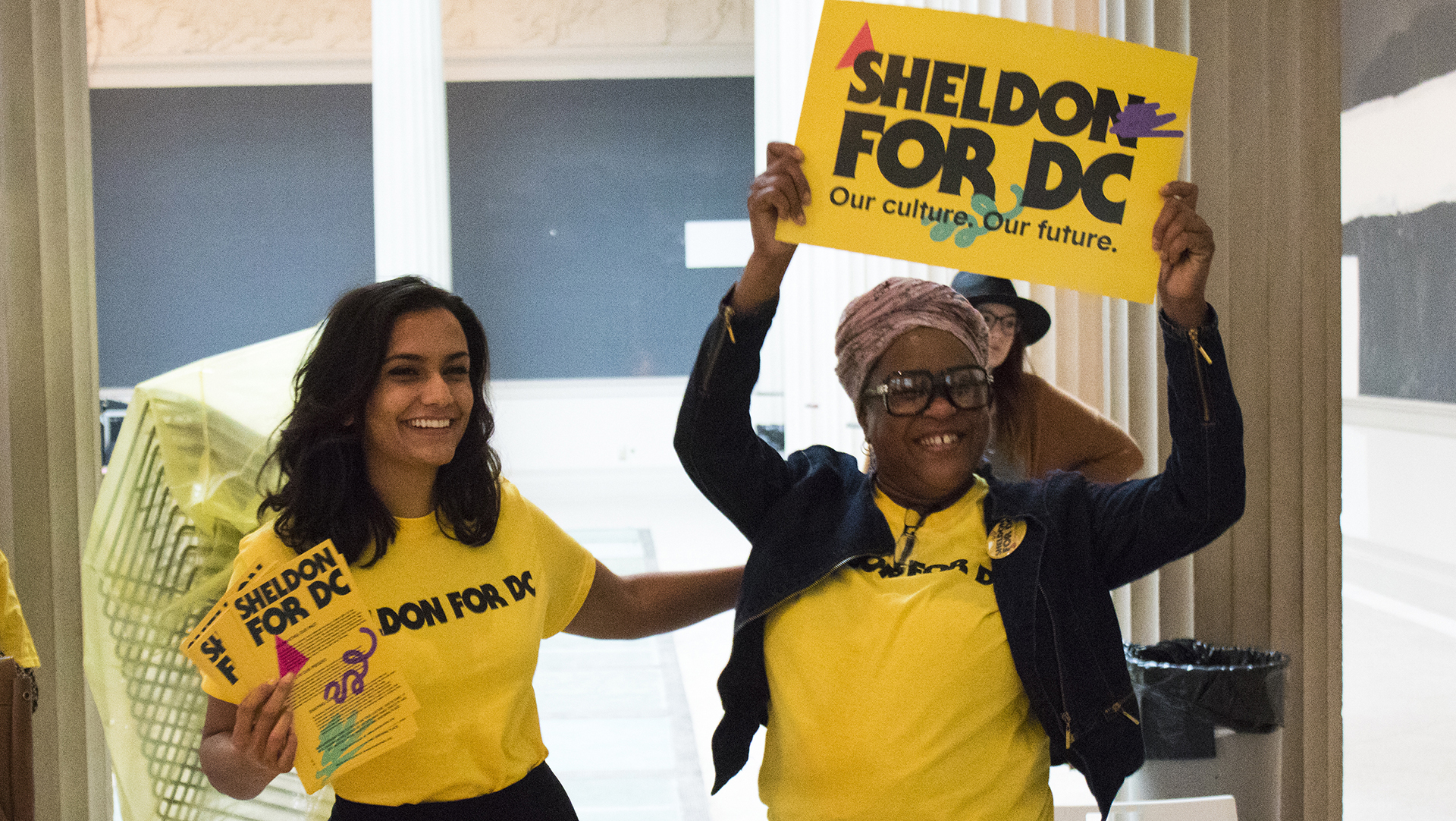 We the people are free to define the culture as we make it, as we live it, as we experience it together in communities of all shapes, sizes, colors, and gender. Sheldon traveled around the District, taking his message to all 8 wards (along with his surrogates) with a message that went something like this:

This… isn’t about winning or losing an election. Instead, it is about mobilizing a constituency. It is about listening and giving voice to DC’s artist community, imagining a city where artists have a seat at the table in local government and cultural planning, and forging a vision for DC culture in the future.

The Sheldon for DC campaign was based on the idealized need to “unite and rally actors, artists, dancers, designers, musicians, and writers into a potent, vocal, political force,” a movement that would insure that the artist as social revolutionary is a voice for change in the community & local government. This may at first glance appear naive or even hyperbolic, but in actuality, it is a vital aspect of the role of the artist in society, to voice that which is never uttered in mainstream politics: situating art and its critical concerns at the center of political discourse.

The thrust of the Sheldon for DC campaign now seems particularly poignant, even nostalgic, when in 2020 freedom & democracy & the people’s voices are increasingly suppressed by an out of control demagogic president. Do we need to revisit another artistic campaign here in the power center of the nation’s capital, as a challenge to the pervasive cultural divide that threatens to erode the promise of equality & humanity in America? Sheldon: as a potent DC cultural force, perhaps the closest thing we have to a surrogate Minister of Culture – simply because we don’t actually have one – where do you stand today?!

This question & many others will be posed to Sheldon Scott & Peter Nesbett this Saturday, February 22nd, 12-1pm ET-US on Networked Conversations, broadcast live from the Underground Studio Bunker in Washington, DC. Please join us in Crowdcast, our third space online platform for creative dialogue. Save your Spot: https://www.crowdcast.io/e/networked-conversations-2-22-20