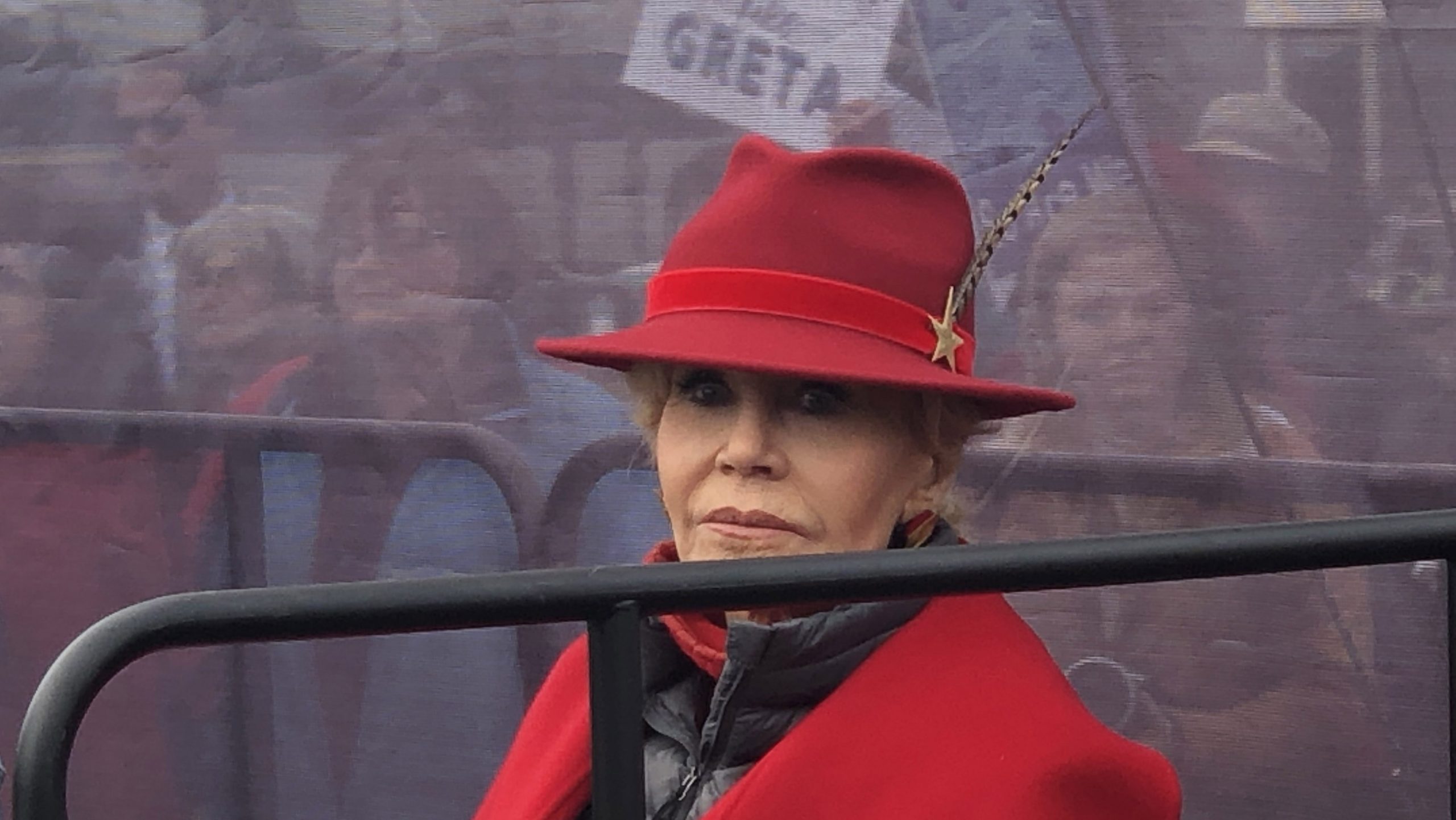 On the one hand, there is the corrosive effect of Celebrity, which infiltrates & corrupts the human spirit through intrigue & scandal. We have already seen how this infiltration can worm its way into the political process to induce monstrous manipulation of the body politic. Celebrity can easily be weaponized and used to destroy the values that make us human, by appealing to an adrenalized stimulation of hatred and divisiveness. We have seen this in full force with XTreme TRUMPology. But there is another kind of Celebrity, that which appeals to our better angels, those who use their Star Power to rally hope, determination, and to challenge the corruption of greed, war and environmental destruction. 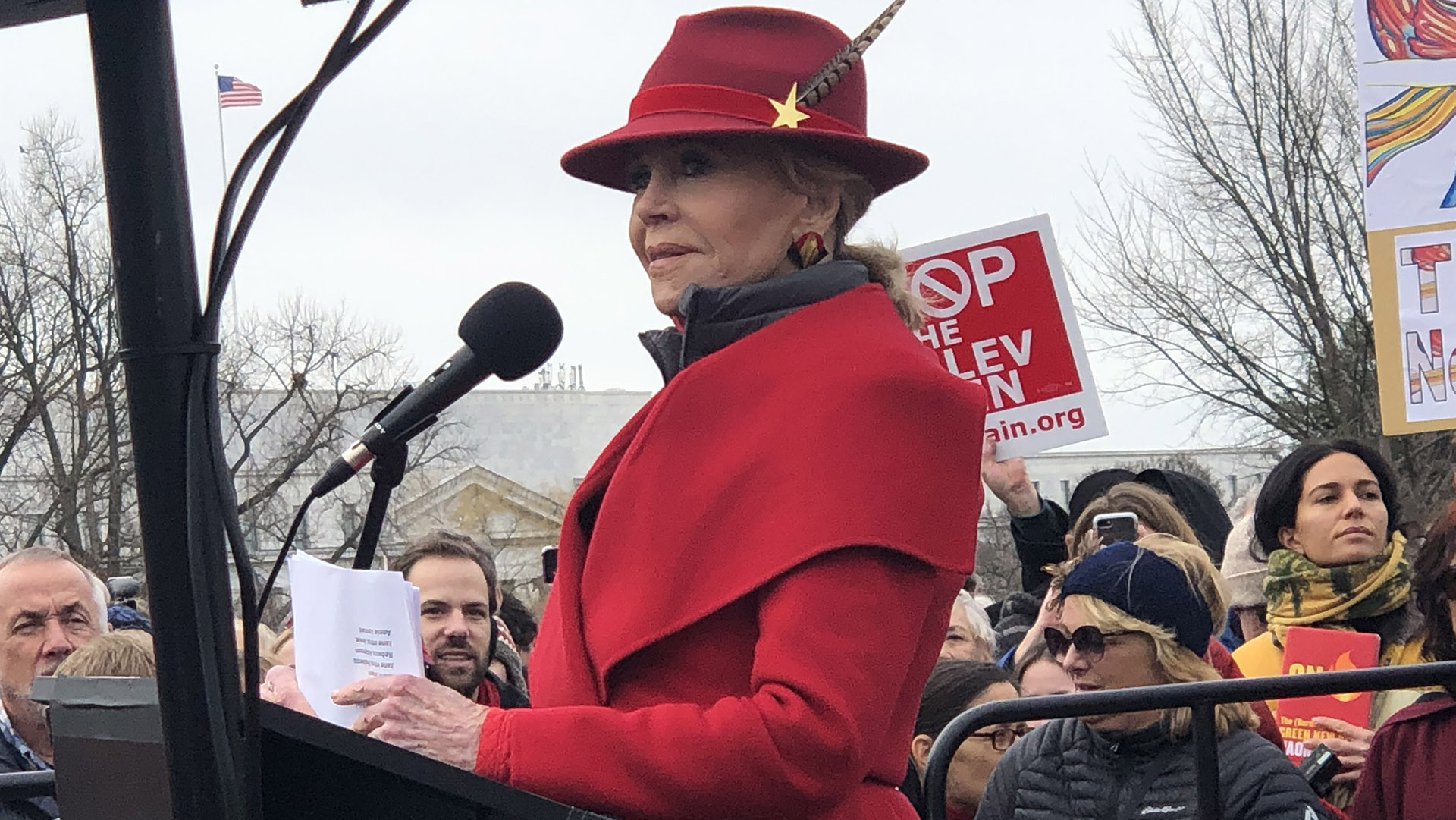 Jane Fonda has been on the front lines of activist causes since the early 1970s when she traveled to Hanoi to protest against the Vietnam War. At 82 years old she is still a militant embracing the good fight, using her Celebrity to bring raw hope & idealism to the political fray at a time of catastrophe and near hopelessness. Last year she decided to come to Washington to shake things up, inspired by Greta Thunberg, to create some “beautiful trouble” with her weekly Fire Drill Fridays on the east lawn of the US Capitol. At the conclusion of each rally, she and her followers stand tall on the steps of the Capitol, where they are arrested as a symbolic & defiant act of civil disobedience. 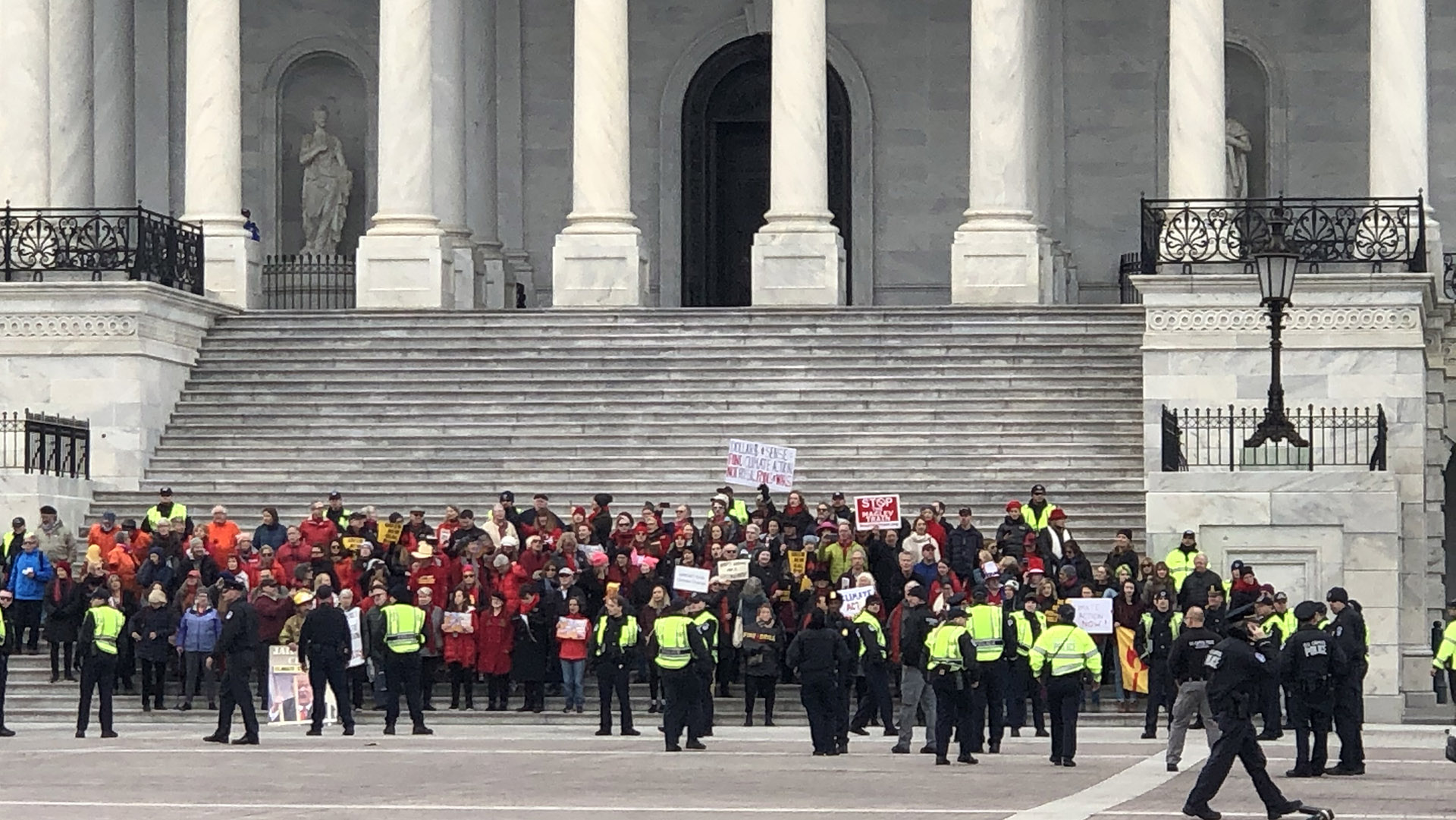 However, there is a much bigger effort at stake here than simply getting arrested. Fonda inserts her Celebrity into the political arena as an act of mediation: bringing other celebrities along with her to amplify the message of environmental consciousness. At yesterday’s rally, one movie star after the next ascended to the stage to give voice to the cause celebré of Fire Drill Fridays, to energize the crowd, and to prove that there are more important things in the world than hanging out at Hollywood parties drinking Martinis. Just four days after winning the Golden Globe for best actor, Joaquin Phoenix emerged from the crowd looking like a hard-core activist with his long gray-streaked hair and straggled beard. Phoenix declared we can all contribute to the effort by altering our diet and energy consumption as an act of personal responsibility to make the world a better place 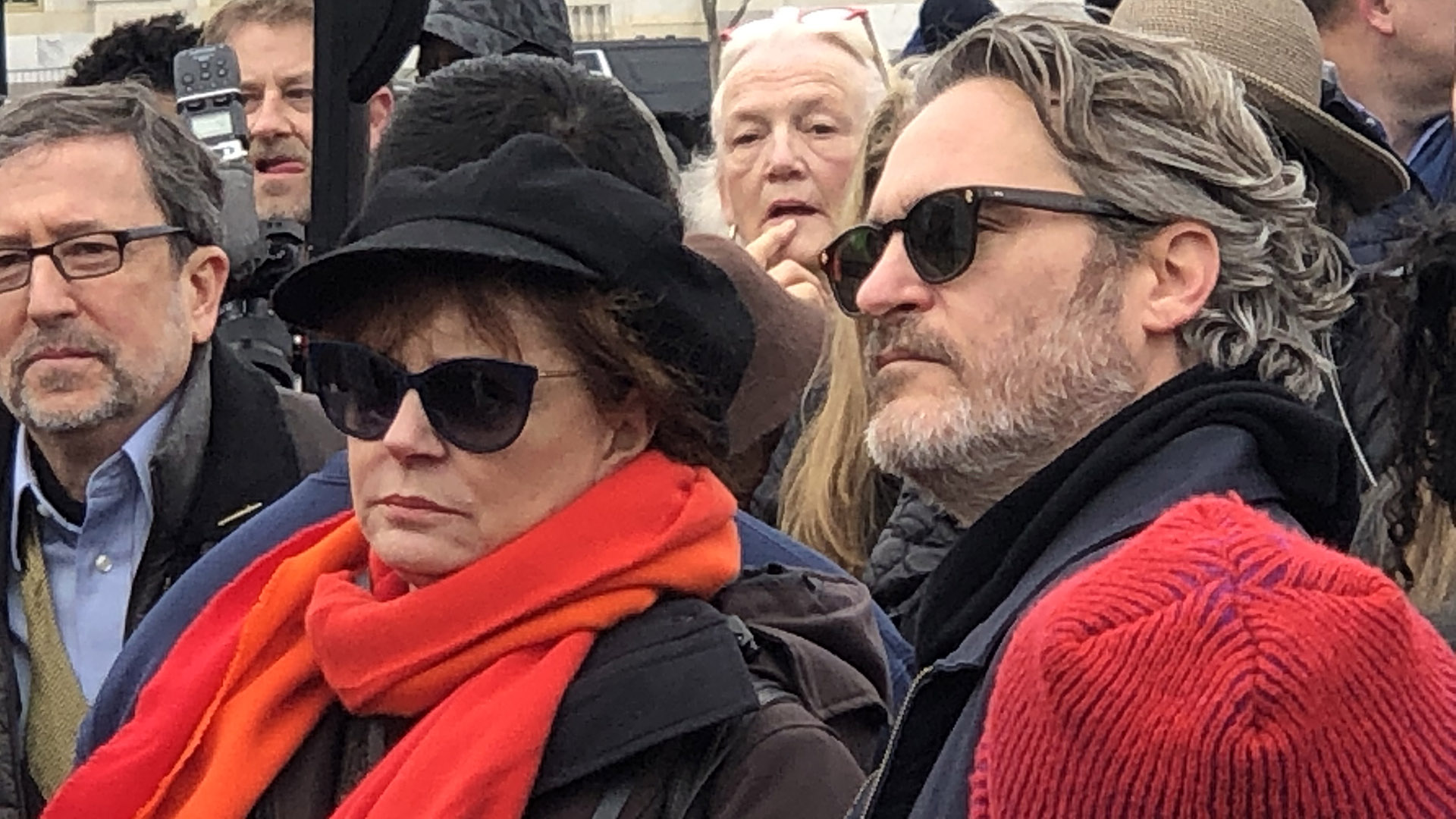 And there as a nearly anonymous looking boomer standing alongside Joaquin Phoenix was Susan Sarandon. Known for her social and political activism, Sarandon has been a UNICEF Goodwill Ambassador and was the recipient of the Action Against Hunger Humanitarian Award in 2006 (not excluding of course an Academy Award). She, like Phoenix, had flown herself into Washington DC on her own volition to support Fonda, to embrace the movement of Fire Drill Fridays, and to simply BE THERE as a generous display of solidarity. Raw hope indeed. 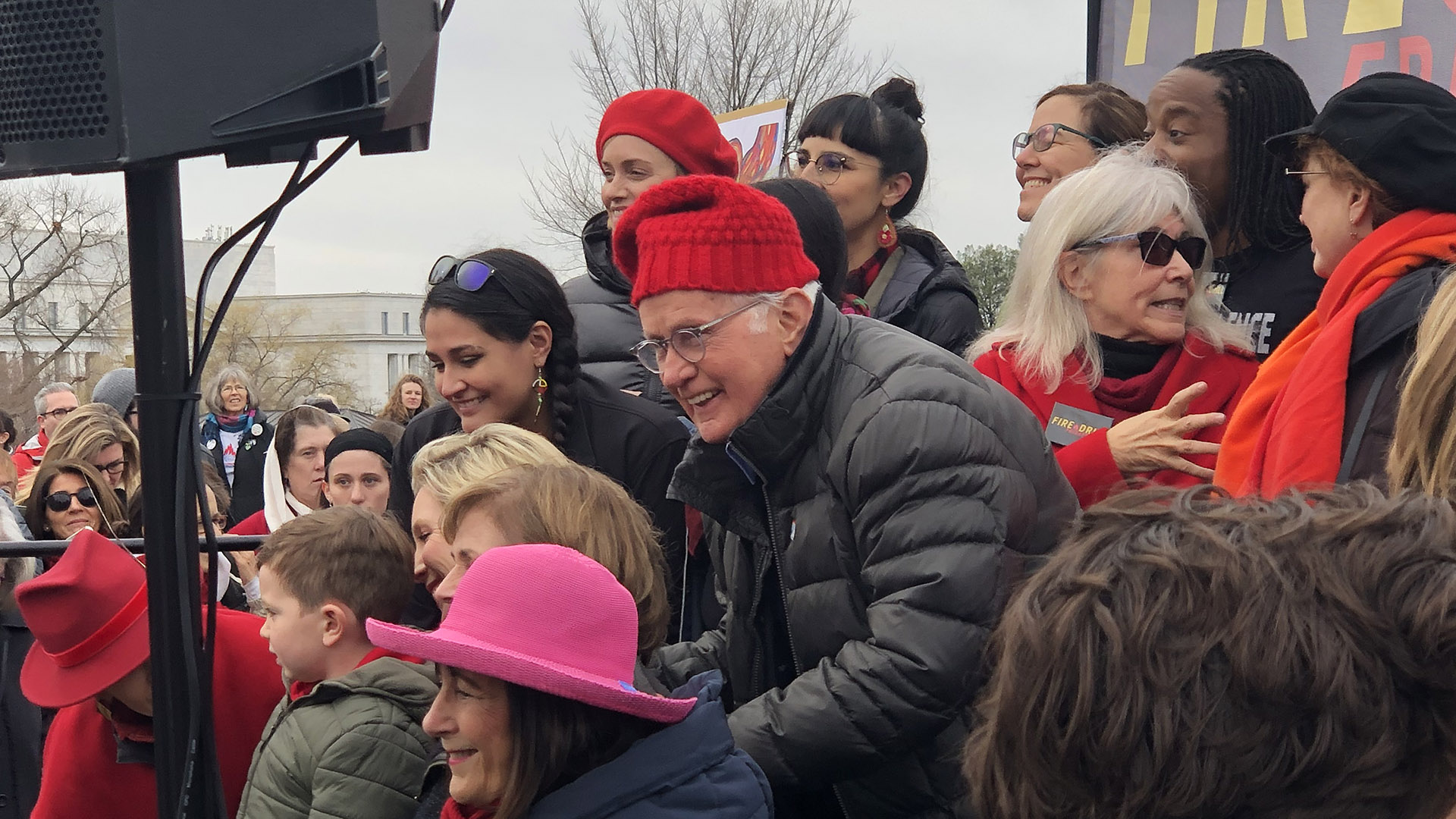 But the grand moment of catharsis has to be handed to Martin Sheen, who in his President Bartlet-style eloquence, brought down the house with the words from a poem by Rabindranath Tagor:

“Where the mind is without fear and the head is held high, where knowledge is free. Where the world has not been broken up into fragments by narrow domestic walls. Where words come out from the depth of truth, where tireless striving stretches its arms toward perfection. Where the clear stream of reason has not lost its way into the dreary desert sand of dead habit. Where the mind is led forward by thee into ever widening thought and action. In to that heaven of freedom, my father, LET MY COUNTRY AWAKE!”

By delivering these powerful words across the expanse of the east lawn of the US Capitol, while Congress is immersed in bitter partisanship, and while the country is sinking into a deep abyss, Sheen awakened the crowd’s raw hope of Star Power as a beacon of illumination to get us out of this mess.