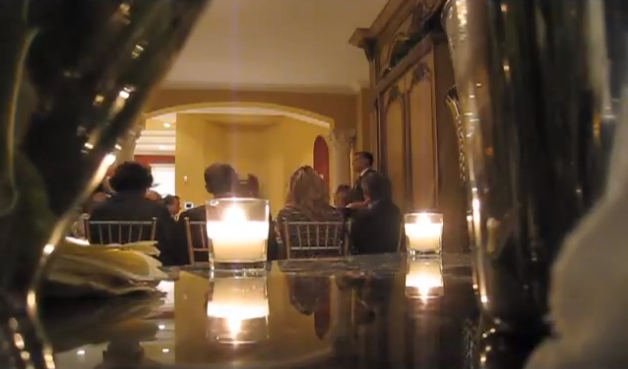 In just 24 hours, the perspective from this hidden camera has become an iconic portrait of Mitt Romney’s ideological view of the downtrodden. The polished table, flickering candles, and tall vases that frame this shot exude an exclusivity and wealth that heightens his callous remarks. We see the backs of elite donors seated in what appear to be designer chairs, waiters zipping across the room, as we become privy to the horror of what goes on behind the closed doors of the parlor crowd. This secret video has just upended American politics.

How could this have happened in a world of secret service and high security? A world that vets every word, every smile, every gesture? Well, it’s the world we live in, where there is no longer a clear divide between public and private, where telecommunications are mobile and ubiquitous and constantly capturing everything. We no longer live private lives: everything is instagrammed, shared and distributed. We are our own self-surveillers. We are the portraitors of our everyday reality. We are storytellers, exhibitionists and voyeurs all at once. And Mitt Romney just got caught in the crossfire.

Like the camera that caught the Rodney King beating twenty years ago, the photographic breach of public space is not entirely a dark cloud. The hidden camera has become source material for catching perpetrators of oppression, it has become citizen journalism for revolution, and in the case of Mitt Romney, it has stripped away the camouflage of political spin. Where there was once a demarcation between public and private is quickly eroding because people embrace it. The meteoric rise of social media has blurred the quiet intimacy of private lives with the extension of our global reach through communications and the digital camera.

Humans evolved as fundamentally social creatures who easily distinguished between public communications — at a village meeting, for example — and private ones between friends and family members. Intimate communication was key to forming and maintaining relationships that were the building blocks of society. Craig Timberg and David Nakamura of the Washington Post

We have become social beings who prefer to reside in the public space over the intimacy of private relations because of our total embrace of media. The candles that flicker in the Romney video are somehow emblematic of the secret lives of others that draw us in like moths to a flame. Be careful you don’t get burned.