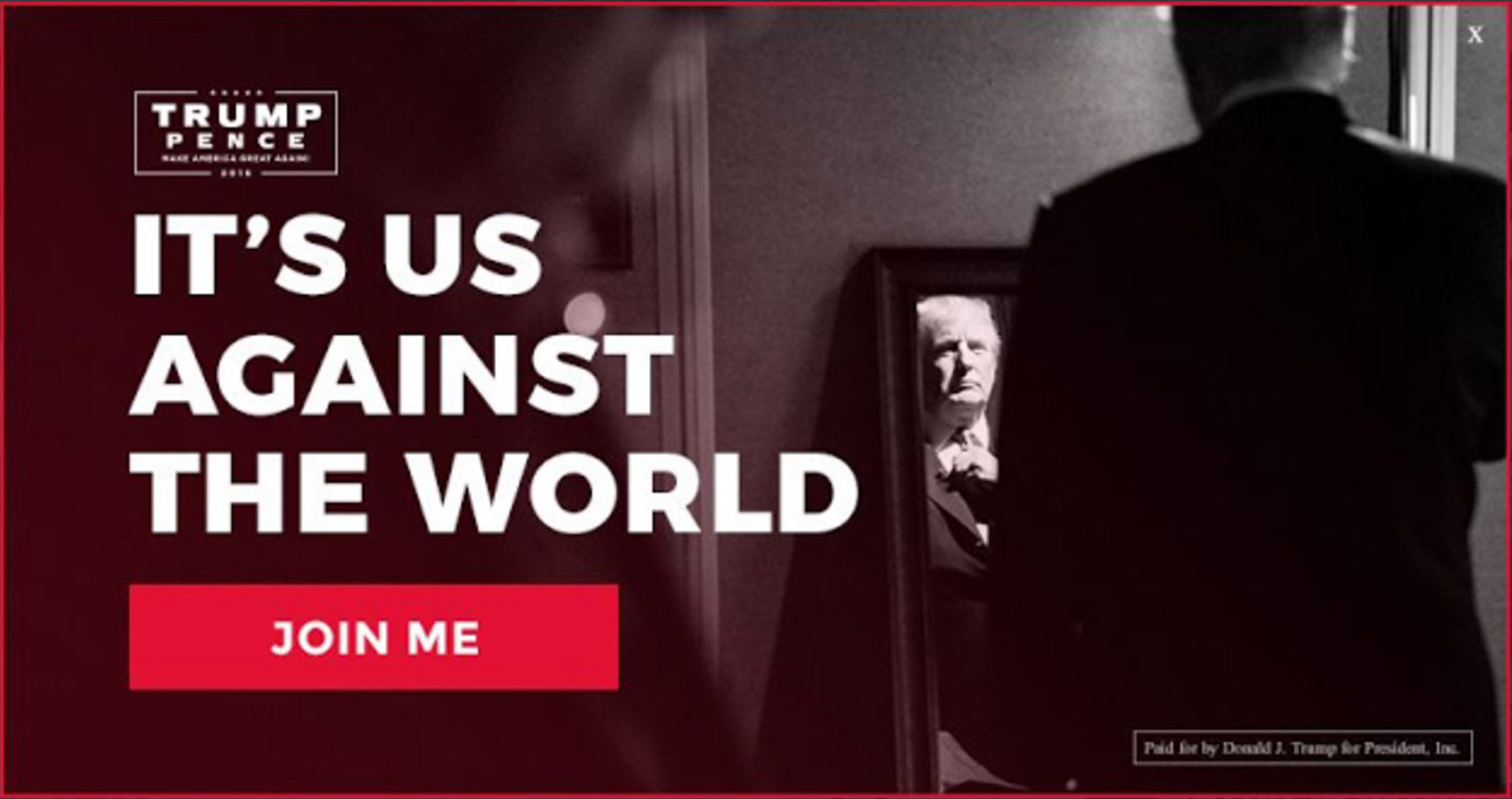 Ever since Donald TRUMP made his mephistophelian deal with Stephan Bannon, CEO of Breitbart News Network (truly the devil incarnate if there is ever was), the star of Make America Great Again has descended down a path into the Abyss from which there truly is no return. This unholy alliance confirms TRUMP’s pledge to cross the red line, no holds barred, over the edge of political insanity, into the speeding lane of post reality disintegration, blurring whatever daylight may have once existed between that which is real and that which is not. The new slogan, It’s Us Against the World, promises to wreak TOTAL HAVOC on what little is now left of integrity in the American political system.

When It’s Us Against the World was announced a few days ago on the Breitbart site, Bannon and TRUMP were busy unleashing the next episode of Make America Great Again, a tabloid assault intended to drag the election even deeper into the muddy slog of Lurid Spectacle. Just hours before the second debate, TRUMP and Bannon orchestrated Bill’s adulterous history in the bright media light, staging a press conference tableau that featured hot confessionals from four angry women (in a lineup resembling the Last Supper) who have declared various accusations of brutality on both of the Clintons. It was probably the most wickedly surreal moment in political history, a scene that pales the worst of any reality tv scenarios the Bravo Channel could concoct. 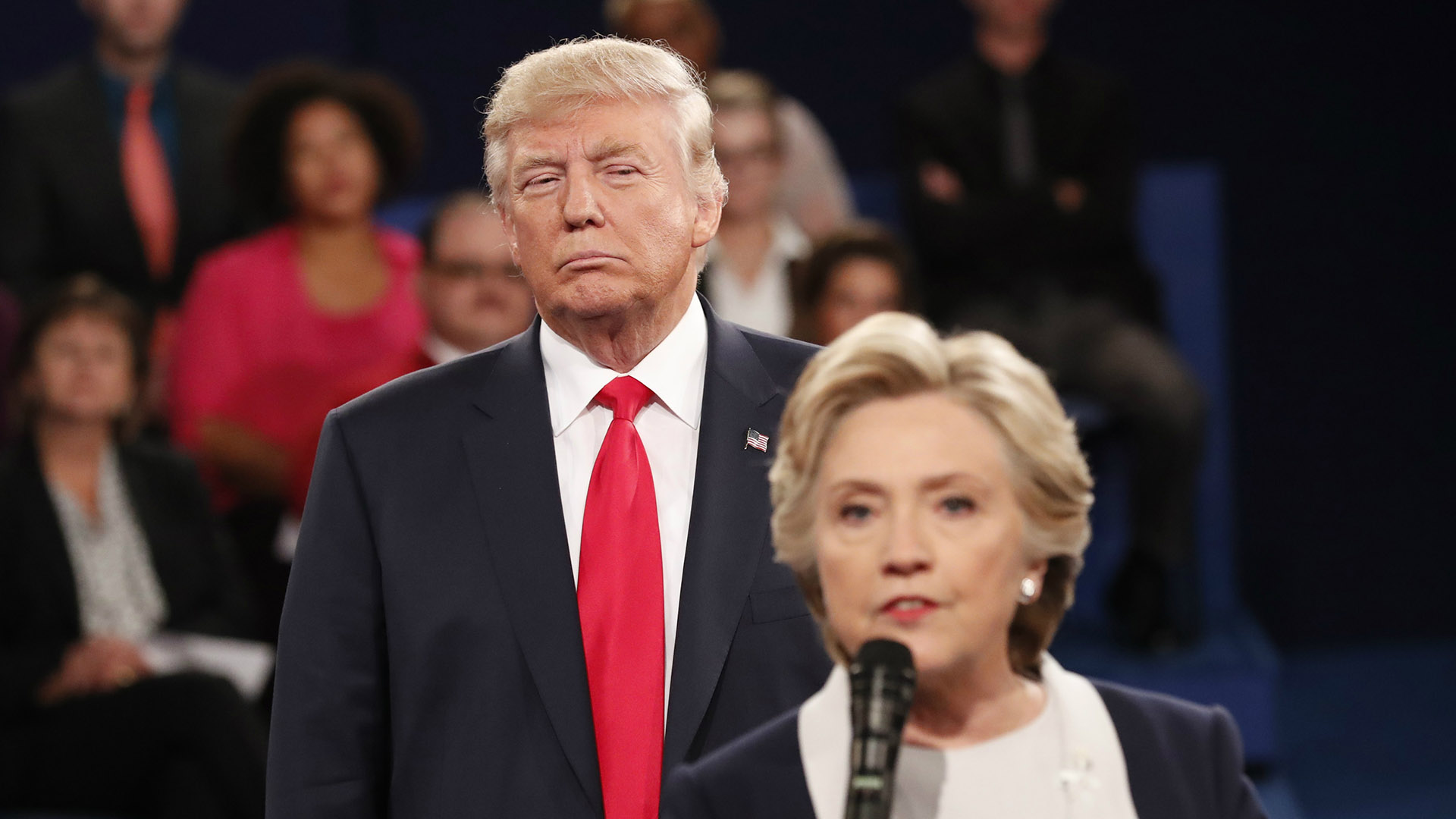 Make America Great Again has now achieved the absolute pinnacle of Oxymoronism: an evolving political campaign narrative based on theater, propaganda, intimidation, and the absence of truth. If this is how you make American great, than TRUMP is brilliantly rewriting the story of democracy, or perhaps lifting his script from the civil wars of Julias Caesar and the fall of the Roman Empire. Now that TRUMP has removed the few remaining shackles of political correctness, civility, rational discourse, and respect for democracy, his It’s Us Against the World scorched-earth, alt-right inspired campaign is apocalyptically dismantling the system as we know it.

As the Bannon-infused TOTAL NASTINESS campaign lurches on, TRUMP continues to attack his brethren and sink his social media teeth into Elite Republicans, lustily drinking their blood, causing them to shiver and cower as he ferociously drags their political careers, along with himself, over the edge into the Breitbart Abyss. As TRUMP goes low, he finds ever more inventive ways to go even lower.

We have to ask ourselves: why in Hell is TRUMP doing this? As a newbie politician who has only just entered the fray, he has zero history of bucking the establishment. TRUMP IS THE ESTABLISHMENT. HE IS THE ELITE. TRUMP has built his epic reputation on a rigged American system that rewards the 1%, perhaps more skillfully than anyone. TRUMP has found the means to pull the levers of power to take whatever he wants in his quest to build the ultimate Empire. And now, it is the height of irony to witness his Us Against the World tirade, which exposes the hypocrisy, the manipulation, the unrepressed opportunism to increase his brand recognition. There is no political intent in the TRUMP agenda, US Against the World is an idealized vehicle for pure drama and conflict. The only thing great about Make America Great Again is that it’s great theater.