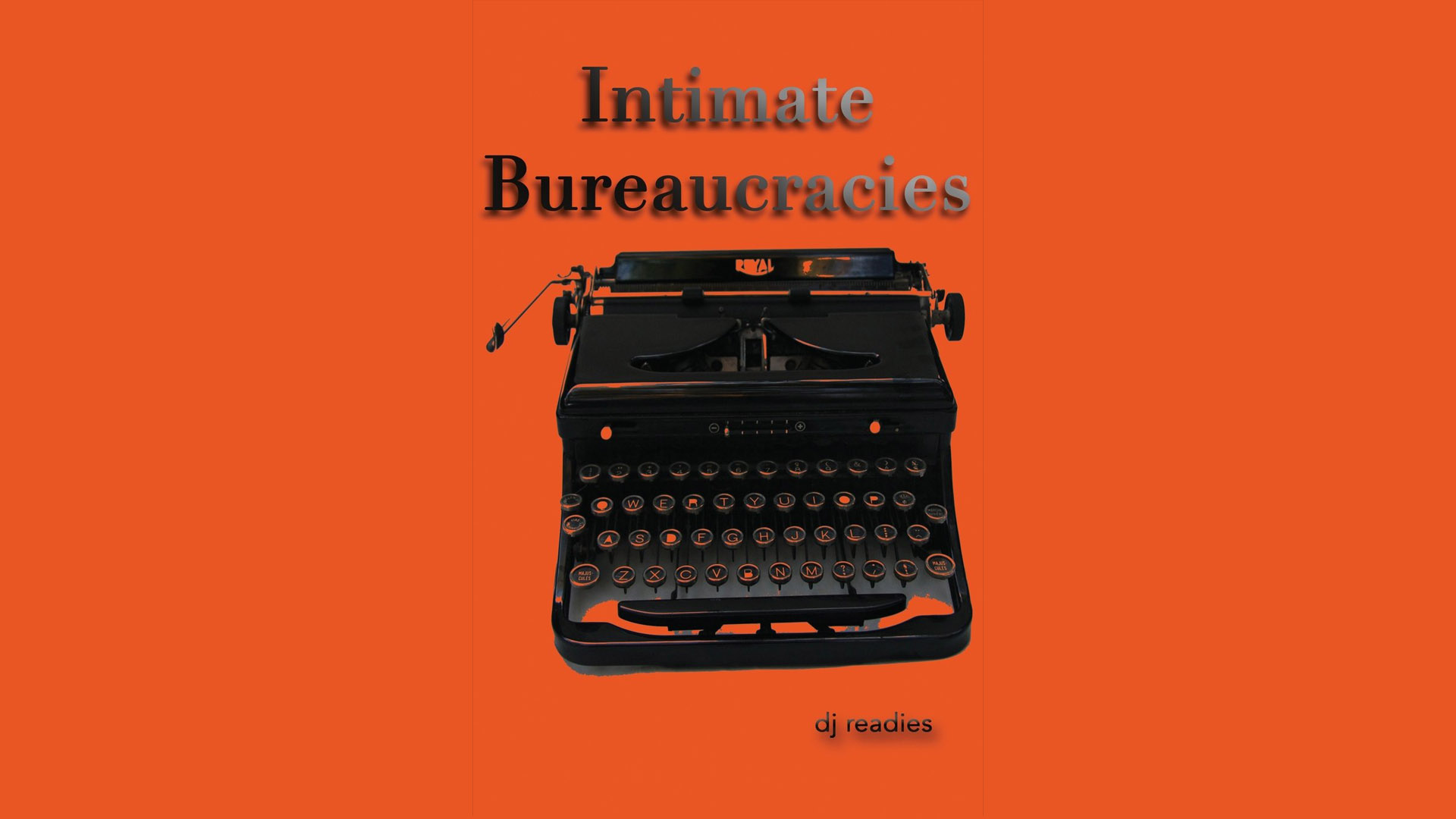 The aesthetics of connectedness, the focus on concrete enthusiasms, the links and movement among the enthusiasts’ groups, and the willing manipulation of desires make the networked art experiments into a model for, and demonstration of, cultural invention and social action. – Craig Saper, Intimate Bureaucracies: A Manifesto, 2012

As we ride the turbulent waves of the viral sea, we see emerging all around us islands of intimate bureaucracies. Craig’s Saper’s manifesto on radical communities of invention forming autonomous entities of socio-poeticism couldn’t be more timely & revealing about the state of humanity right now. In a bureaucratized nation under siege, burdened with layer upon layer of oppressive systems & regimented constraints, people of all walks of life are working under the radar to create alternative systems & social structures of their own making, lean & mean, intended to empower themselves & each other in this epic state of emergency we find ourselves in today.

Intimate networks offer connectedness and shared responsibility in the face of a lack of power. They often explicitly discuss their collective efforts as “underground” alternatives to corporate power. – Craig Saper, Intimate Bureaucracies: A Manifesto, 2012

Amidst the viral sea, we now find ourselves gasping for collective breath as this horrific virus invades & drowns our respiratory systems. Rather than depending on the unstable powers that be, we see all around us the collective efforts of groups & communities forming their own networked entities to salvage everything from education to commerce to the arts to marriage ceremonies. We are now dependent on each other as islands of intimate bureaucracies, they have become our lifeline, relying on alternative social spaces such as Facebook groups, shared Google Docs, Zoom meet-ups, virtual town halls, Instagram livestreams, community bulletin boards, et al. We see emerging at the speed of light any & all forms of online structures at the grassroots level that enable life to keep moving in face of forced social distancing and urban lockdowns.

Artist techniques of collaboration are now one of the primary sources of inspiration. For years artists have engaged in modeling new social environments, new urban activisms, creating gypsy, underground collectives that disrupt the status quo and change how we might rethink the slow moving, convoluted bureaucratic structures that so often fail us. Saper talks about Fluxus, an interdisciplinary society of artists, performers, and composers based in New York – most notably its founder George Maciunas – who during the 1960s & 70s avant-preneurialized an alt real estate corporation to kickstart the loft community in SOHO, providing artists with cheap, flexible space for live/work studios. Andy Warhol created The Factory, a hangout studio Happening in New York for his underground coterie of artists, rock stars, glamor queens, and assortment of 60s types. There was Ken Kesey & the Merry Pranksters, who in 1964 drove their “Magic Bus” across the country as a rolling intimate bureaucracy of freaks & proto-hippies: ushering in the 1960s social revolution. And more recently, the notorious Yes Men artist collective conducts sly impersonations of corrupt corporations (vengeance against bureaucracy!), as diabolic critique of capitalism run amok. Intimate bureaucracies are as plentiful as society breeds artists & renegades.

The distinction between artists and spectators blurs, not because of the open-endedness of interpretation, but because of the effort to build in interactive game-like structures of discovery and play. – Craig Saper, Intimate Bureaucracies: A Manifesto, 2012

So we must now all become artists, no longer passive spectators, who must participate in the creative imagining of intimate bureaucracies to keep ourselves alive. In 2020, the year that will never be forgotten, intimate bureaucracies have become an everyday part of our collective existence, a way of life that barely resembles the one we lived in just a few short weeks ago. Time has slowed to a crawl as we watch the numbers skyrocket, the economy crumbling, politicians pulling trillions of dollars out of the Federal hat from God knows where. Life as we know it has been upended, and all we have now is each other, our entrepreneurial wit, our poetic innovation, our ability to invent playful interactions despite social distancing. We have en masse discovered the intimate bureaucracy as the last ditch social tactic for survival.