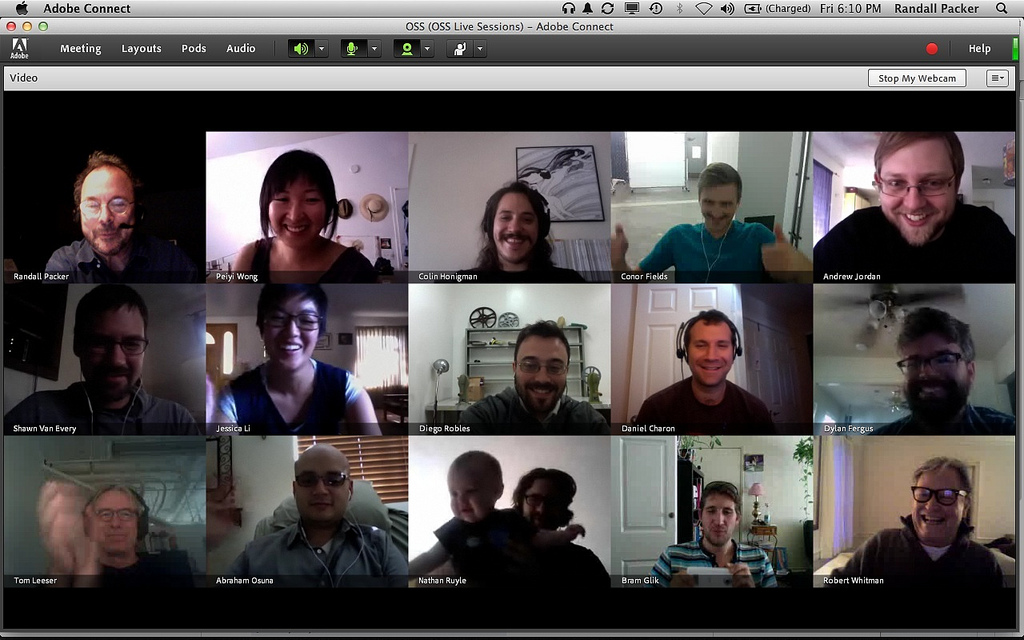 Open Source Studio (OSS), my experimental online studio course at the California Institute of the Arts, is off and running. The Center for Integrated Media, CalArts think tank/interdisciplinary hotbed run by Tom Leeser, has provided the means to make this impossible class a reality. Imagine: eleven graduate resident students from the CalArts Schools – music, dance, theater, film, art – each week hook up with me via Adobe Connect from my underground studio bunker in Washington, DC for a three-hour extravaganza of ideas, artworks, dialogue, and guest speakers. Last week, we had the mercurial multimedia artist Robert Whitman with us, along with Julie Martin, E.A.T. Director, and Shawn Van Every, software designer from NYU’s Interactive Telecommunications Program.

Could this possibly be the future of teaching media art? Have we truly entered the post reality of arts education? When I describe the Adobe Connect session, with its frenzy of video dialogue, chat, media slideshows, and fast-paced navigation around the Web, it’s sounds like a kind of art school science fiction movie. Not so!! In fact, the conversation is extraordinarily substantive: dare I say more so than many seminars I have taught in the world of brick and mortar. Why is this? I’m not entirely sure, but there is something almost transcendent about collapsing the distance of time and space that seems to re-orient the relationship between teacher and student, and between students. There is a sense of immediacy and intimacy that clearly reshapes how we think about the classroom experience.

Not to say brick and mortar is dead. Not at all. But in the eerily strange virtual world we have entered in the 21st century, an alterable geographical reality makes you appreciate the important of physical presence all the more. The OSS students, who meet weekly via video conference, now take delight in seeing each other in the hallways of the art school environment. Could it be that we have come to take reality for granted? Not so in the Open Source Studio, where reality is malleable and collapsible; where it is telematically transformed; and where it is the primary subject of an ongoing investigation of the changing arena of contemporary art, net culture, and education.

So I ask again, is this really the future? Surely one aspect of it. But in the 21st century economic reality of teaching art, of education in general, educators are forced to be imaginative, resourceful, and adaptable to an increasingly technological world. As art schools are facing the changing landscape of their economic future, they should rest assured, the future is not so bleak. It could be that the online experience might bend imaginative, inquisitive minds in the right direction, it might just be a new platform that dissolves rigid educational paradigms: bridging disciplines, cultures, and ideas in powerful new ways.

I say, jump into a live video conference with a virtual roomful of amazing art students and I guarantee it will turn your head around, ready and willing to face the future.