It was ingrained in me early on that the Indonesian culture was the idealized integration of art and the practice of everyday life. This realization began during my art schools days at CalArts, where I studied with the Indonesian master K.P.H. Notoprojo (known to us as Pak Chokro) and learned to play the trance-like, ritual music of Javanese gamelan. At CalArts, the music of Java and Bali was a constant presence filtering through the long, white, sterile corridors, as though a Southeast Asian spirit had inhabited the soul of an avant-garde Western art school.  Although Pak Chokro has since passed away, his daughter Nanik and son-in-law I. Nyoman Wenten continue to teach Balinese dance, theater, and musical performance to this day. All three of them burned into my impressionable artistic sensibility an appreciation of the intricate mosaic of music theater as dance, light, sound, and poetry, which would become my medium.

Ever since I have dreamed of visiting Indonesia, and particularly Bali, with its legendary exoticism and hindu mysticism. At long last I have arrived in Ubud, Bali, where yes it is true, the artistic culture is everywhere, permeating the social fabric, where on every corner of Ubud, it seems, the sounds of the gamelan drift through the streets. Just like CalArts.

Let it be known that the Balinese arts are not always representative of new age, flowery, tie-dyed batik we associate with hippie culture, many of whom flocked here in the 1960s in search of a new utopia. Not at all! In the Barong Dance above, a bull has been graphically slain with his bloodied, erect penis about to be cutoff by jeering slayers. Set to the hypnotic rhythm of the gamelan with its modal melodies and tightly-paced pulsation, dancers emerge with their fingers bent and extended, eyes darting in dangerous anticipation, bodies gracefully moving across the stage with a precision and grace that is otherworldly. 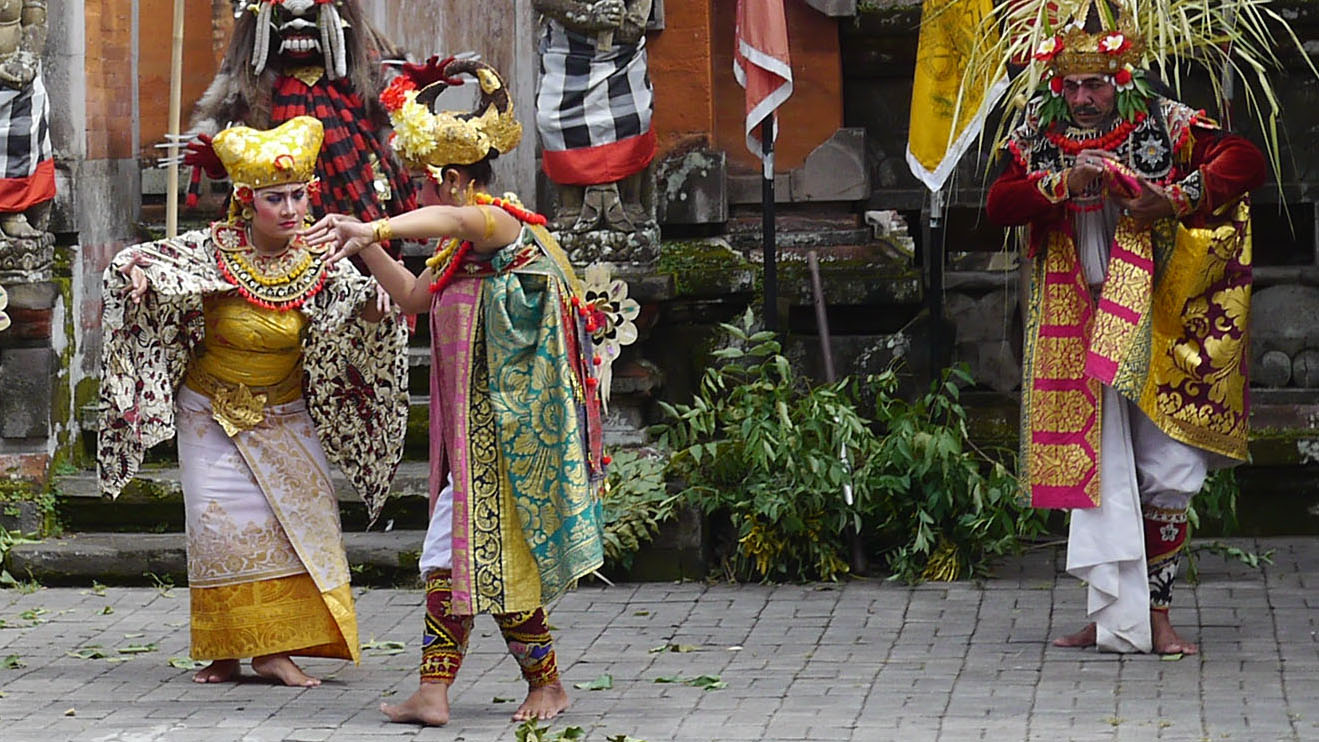 Already in the 11th century, the Balinese had mastered the art of light and projection, creating Wayang Kulit performances with shadows cast by hand-held puppets, the back lit screen illuminated by fire. The magic theater of presenting characters as shadow figures is a powerful mechanism for engaging the transitory nature of life, death, love, war, and human existence. No aspect of the human condition is left out here in Bali. 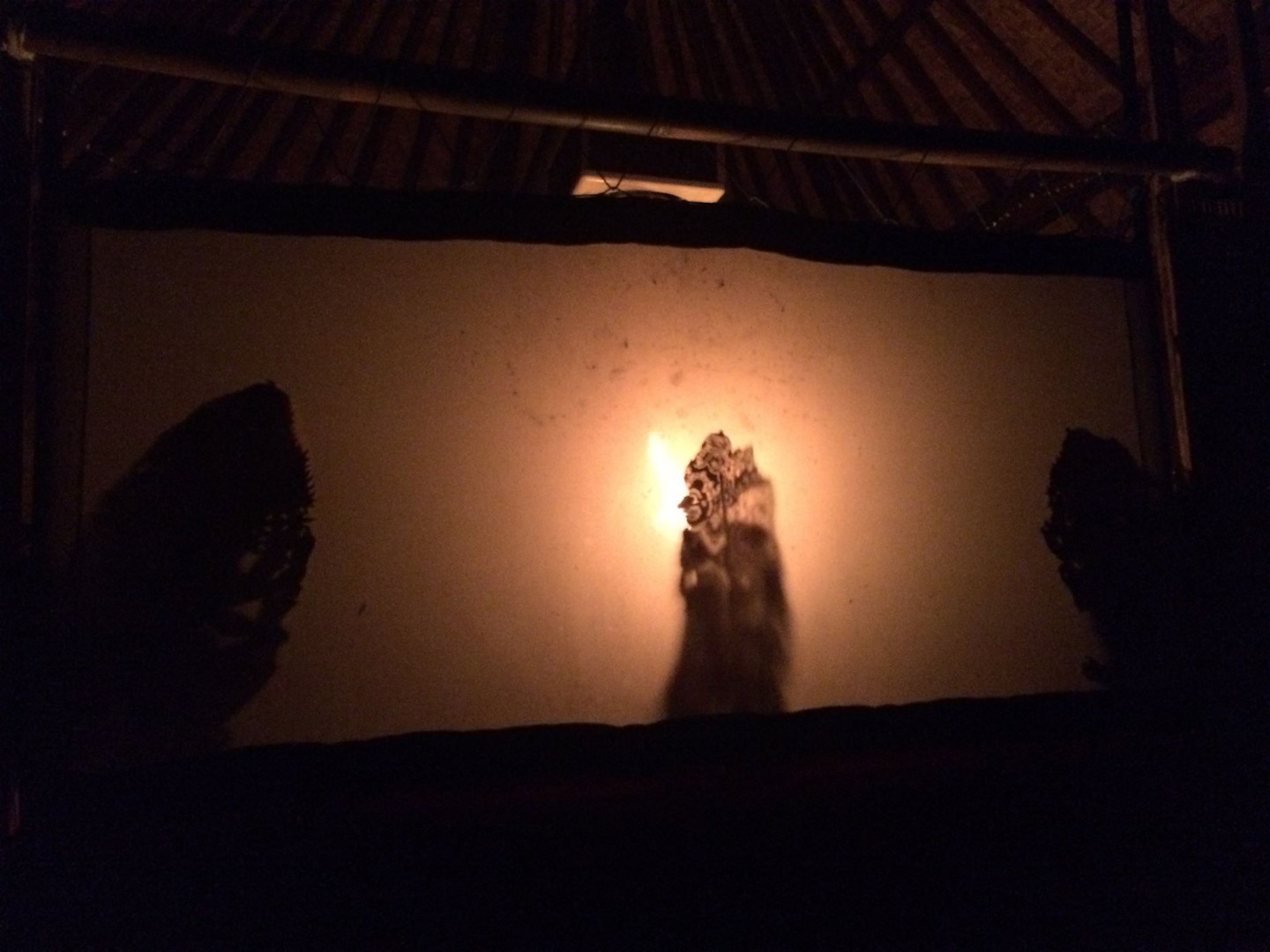 Perhaps the most sensational form of Balinese theater is the Kecak, in which an ensemble of half-naked men perform a cappella, rhythmic vocalising breathlessly with hard-edged sounds evoking a chorus of monkeys. It is a sight to behold as they chant with arms raised to the heavens in a ritual circle surrounding an eternal flame at the center of action. 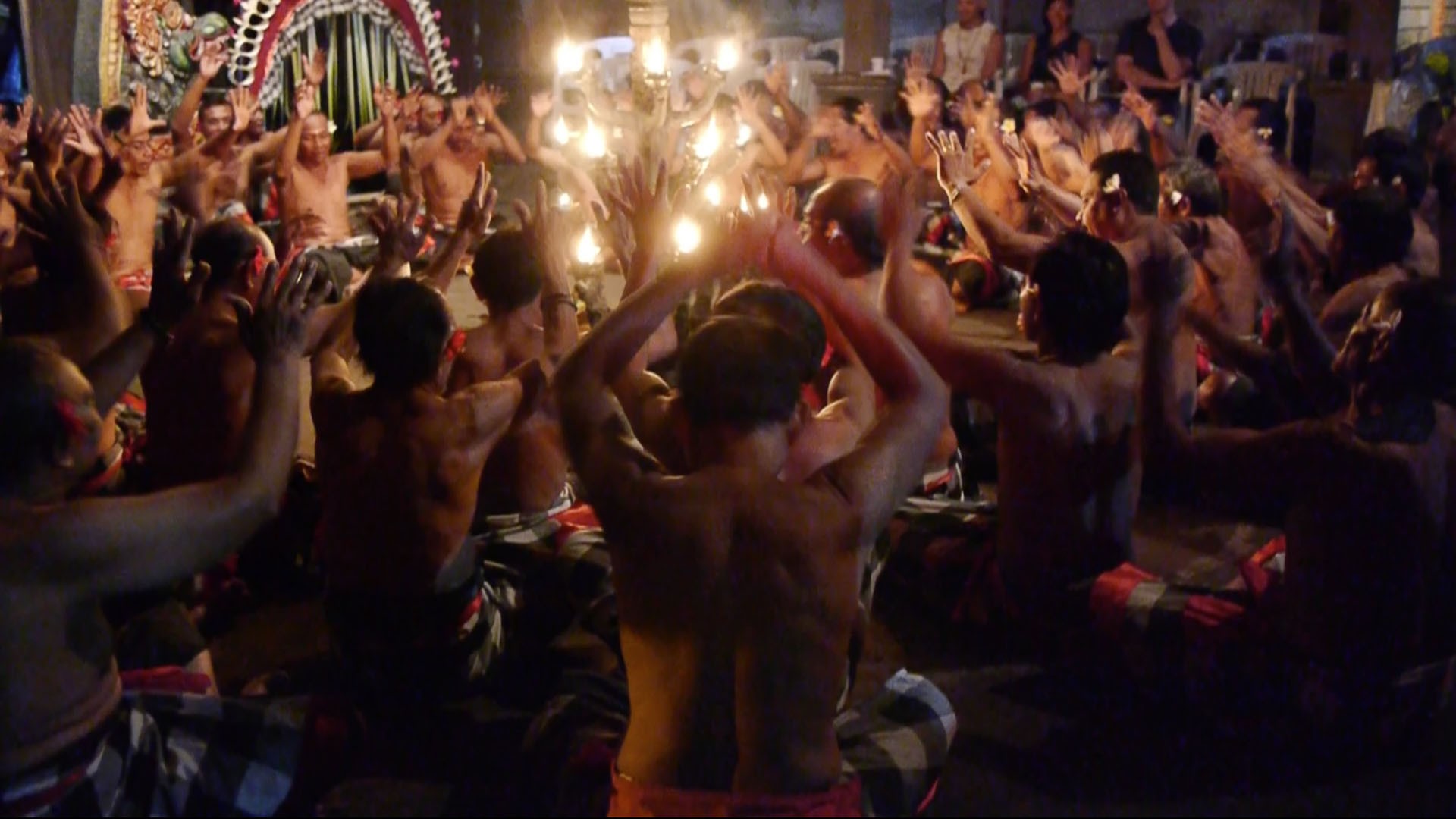 The Kecak provides the setting for a surreal theater of movement, action, and spectacle incorporating tenderness, fire and extraordinary grace and beauty. Despite the traffic noise just a few feet away, you lose yourself in a world unfolding punctuated by the chanters with their trance gestures and swaying bodies. 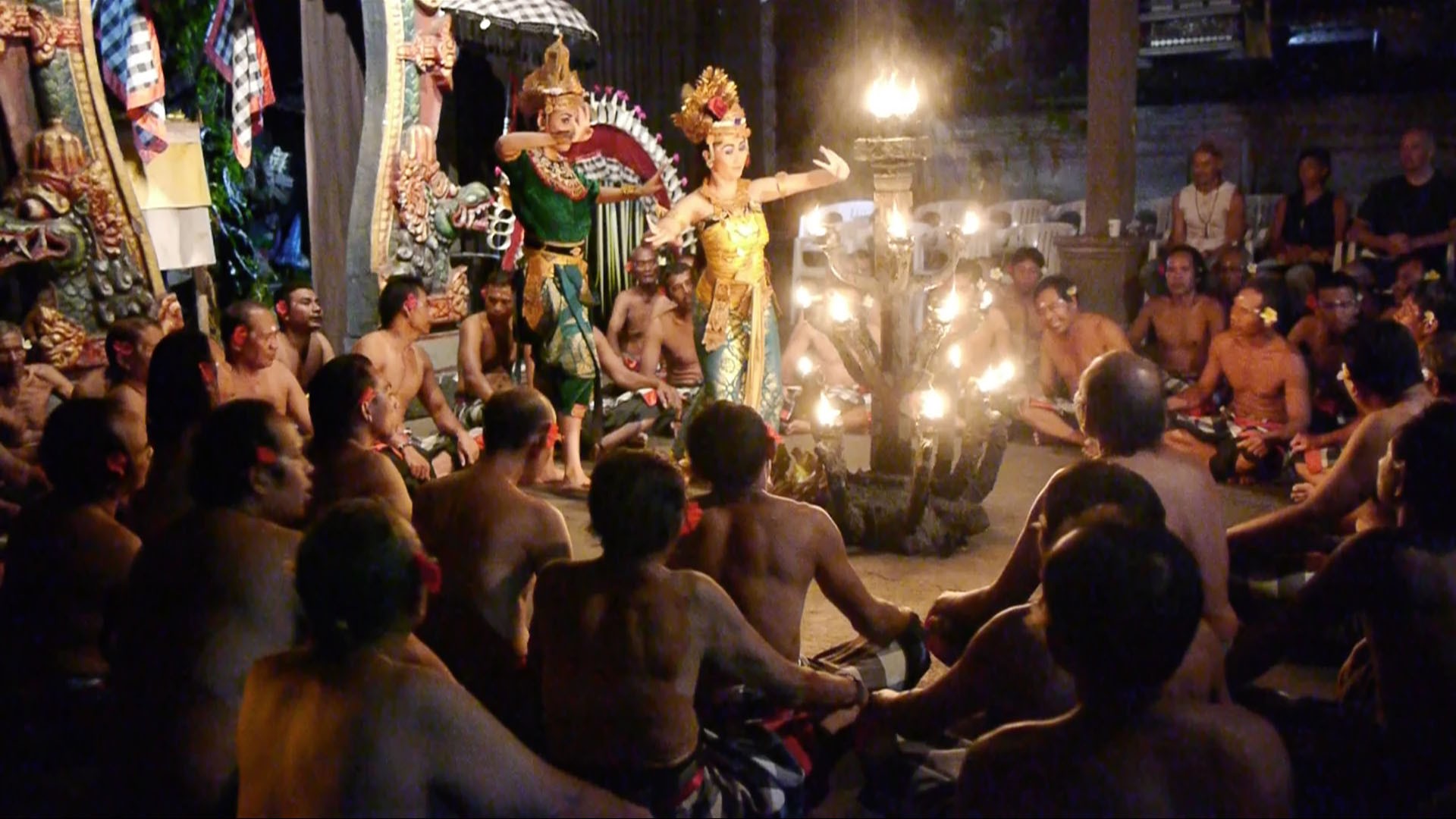 And violence as well. This is the theater of everyday life in all of its manifestations where nothing is excluded and the ferocity of human emotion and aggression is on full display: a guttural, primitive spectacle that engages all the senses. 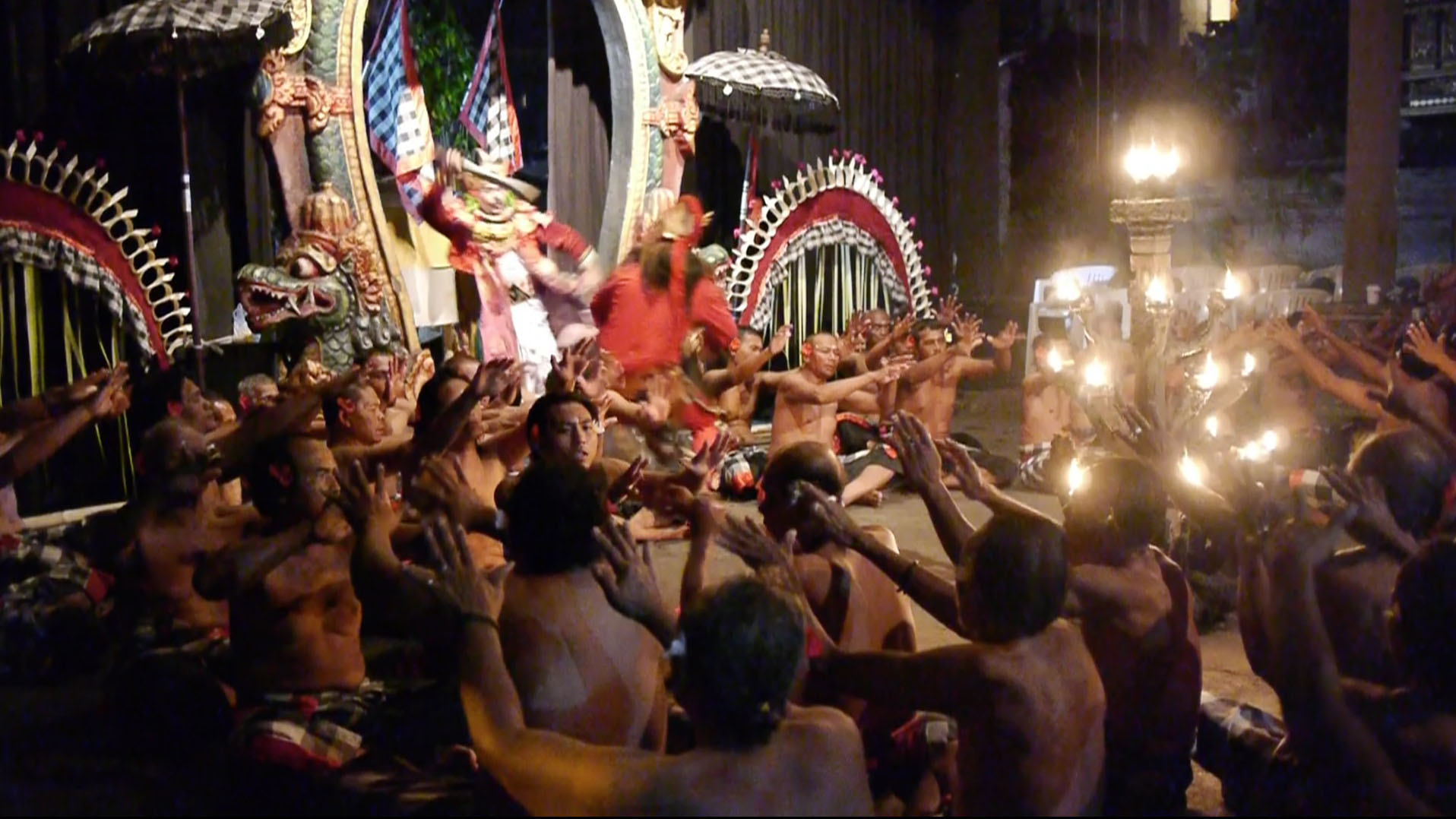 The finale of the Kecak is an immersion in fire, walking through flames, defying the limitations of the physical body by trusting in the gods and the spirit that drives the Balinese culture. What an inspiration, particularly for a once upon a time young art student who continues to navigate the complexities of the multimedia landscape where anything is possible. 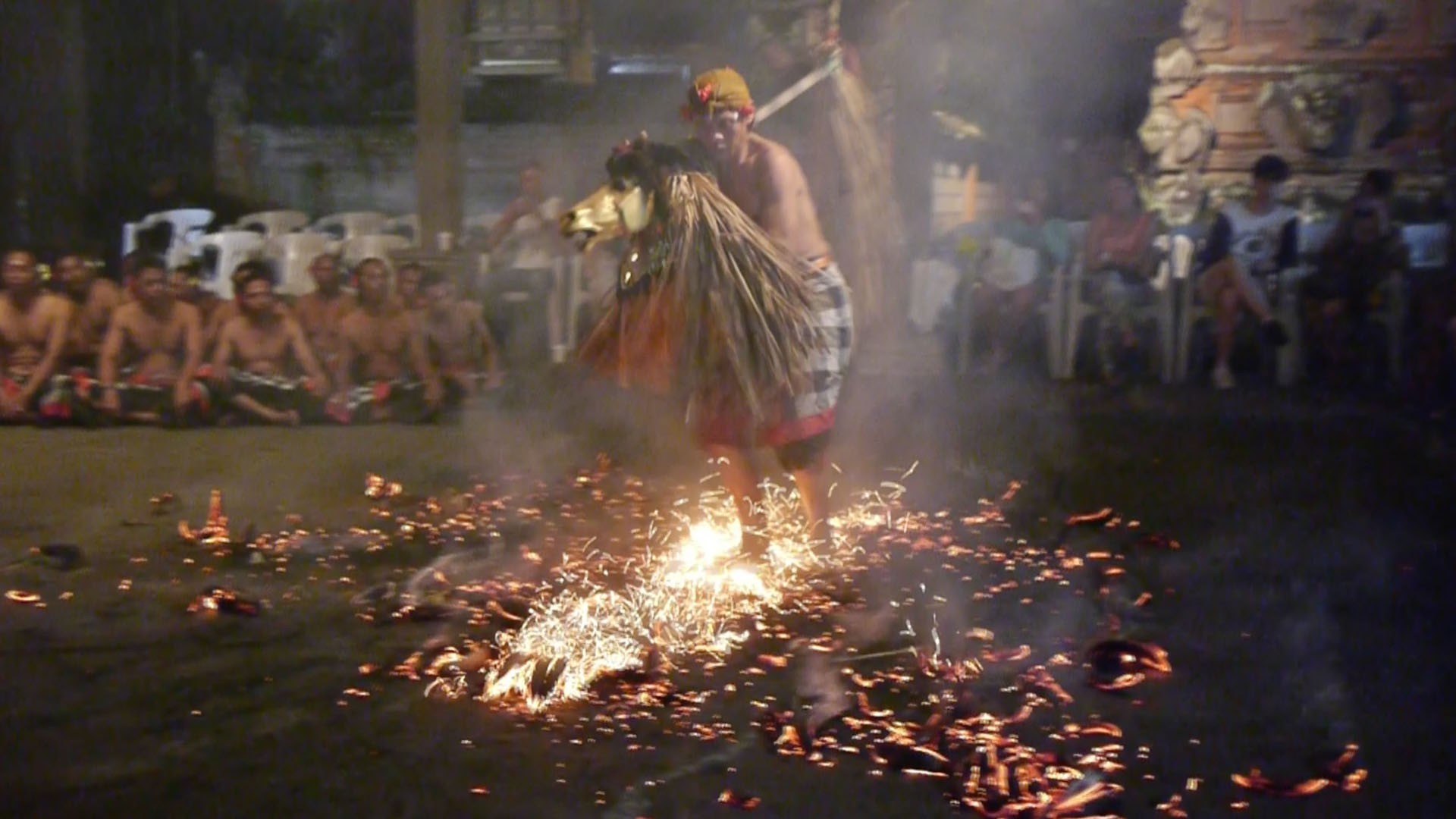