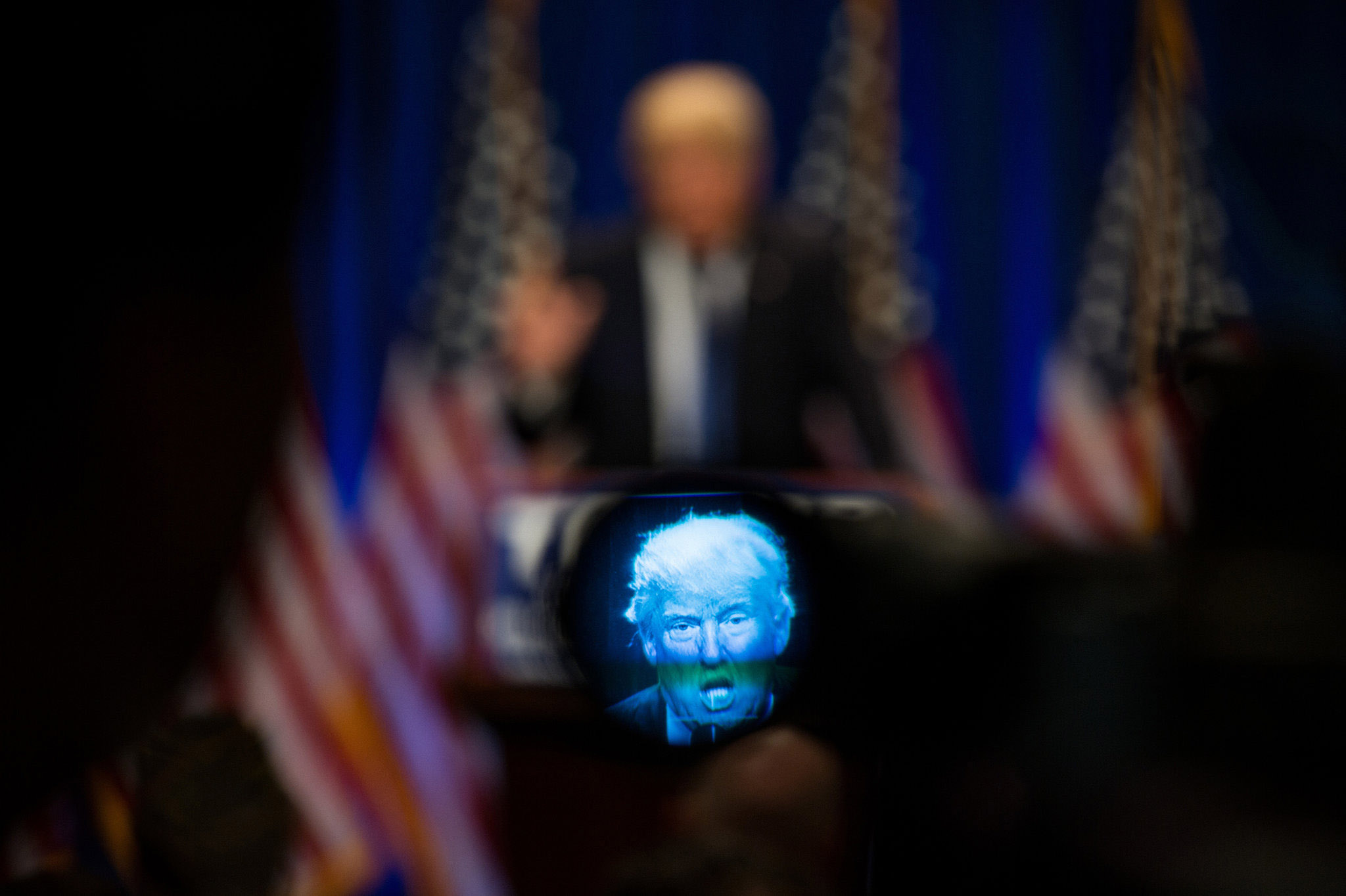 TRUMP Tower extends high in the Manhattan skyline, a radioactive transmitter broadcasting and redirecting an unceasing torrent of incoming and outgoing signals instantaneously and simultaneously, with lethal effect. This is the fulcrum, ground-zero, and the mis-en-scene for the 24/7 chatter of deafening noise that is circulating the globe faster and faster and faster, reaching such a terrifying speed that it threatens a world neurological meltdown. TRUMP has control of all the channels, like a spoiled child who has grabbed the remote, aiming it sporadically, impulsively, and dangerously in every direction at everyone and no one.

From his uber throne high up in the Tower, TRUMP effortlessly and mindlessly taps a few keys on his phone, sends a random missive out on Twitter to his 17.3 million followers; which is then retweeted, liked and tagged tens of thousands of times; commented live on all the cable news channels; tweeted again and fed back into the news transmission; then written up in dozens of news articles, blogs, and online opinion pages; hacked and recirculated on Facebook by the fake news world; then retweeted and reposted again as an appropriated, regenerated, twisted version of its original; until the whole jumble returns to the Tower and is commented on by the Transition Team; only to be recirculated back out to social media and the cable news broadcasts, and on and on and on ad infinitum in one infinitely echoing feedback trail of exploding disinformation and loss of the real: The Exploding Perpetual Motion Media Machine.

The world will not end because of nuclear holocaust, nor an asteroid collision with earth, nor even the implosion of the earth’s climate, no, we are all going to sizzle and drown in the hot circulation of our media. The great accomplishments of modern information science over the past half-century, ushered in by a storied lineage of visionary scientists, including Vannevar Bush (hyperlink), Douglas Engelbart (mouse), Alan Kay (graphical user interface), and Tim Berners-Lee (Web) – these great men who saw human culture realizing its most far-flung ambitions in the augmentation of human intellect through a collaborative system of information sharing – can no longer save us from the lunacy of our own demise.

With a celebrity demagogue at the Control Tower of the world’s media flow, the best laid plans of our global information culture has been hijacked. TRUMP is now commander-in-chief of super-participatory media assault weaponry designed to blast overwhelming torrents of propaganda at the speed of light. Even his rallies were a calculated performance of outrageous perfection intended to do nothing more than keep the live red light on in the unblinking eye of the television cameras: insuring that every word, flourish, and insult was broadcasted to every home, seared deep and irrevocably into the collective brain of the “forgotten man.”

Is there a way to end this madness, you might ask? Or has TRUMP triumphantly morphed himself into a media-savvy anti-christ who wields a smart phone to direct “fire coming down from heaven to earth.” You do not have to go far back in history to see what happens when politicians are hell-bent on controlling the news. But never before was the control of information so immediate, so direct, so forceful, so punishing to our democracy. The problem is that we are all complicit, all of us, riveted to the broadcast, seduced by the transmission, hypnotized by the Spectacle: all of us, willing participants in the TRUMP Show.

The only cure is to STOP WATCHING.