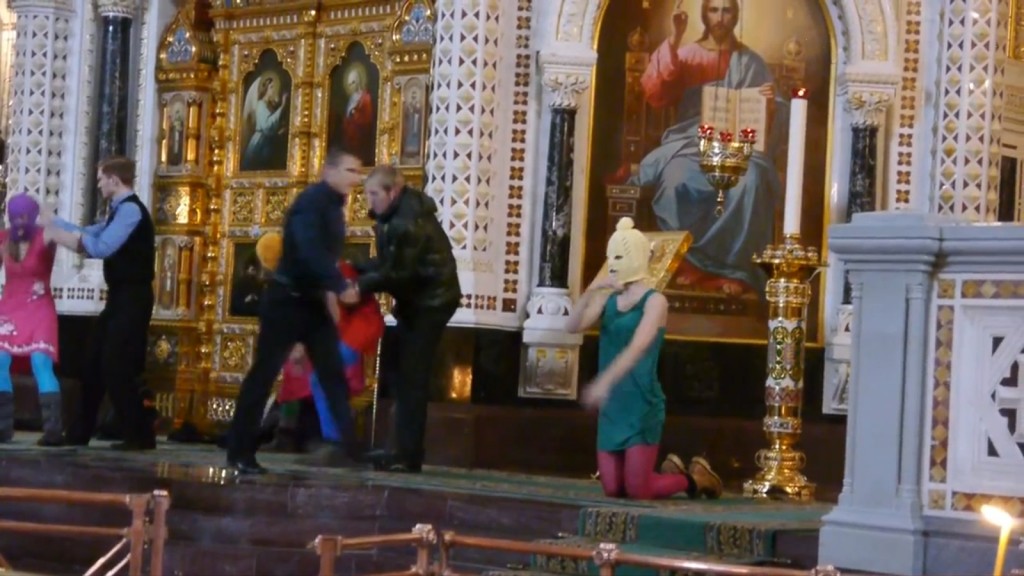 In an attempted hierarchical shift of power to turn the church against the state, Pussy Riot has been brought down in heroic flames of martyrdom. This female collective has virally blasted a punk rock message to the Russian regime and the world: we can’t be stopped at the alter. The toxic mixture of the Russian Orthodox Church, raucous music, YouTube, the Virgin Mary, and an embattled Putin has created an international sensation. Even Madonna stopped one of her mega-arena performances to pay tribute to Pussy Riot.

It all began in February of 2012 when the legion of activists infiltrated the Cathedral of Christ the Savior wearing colorful balaclavas, and danced around in front of the golden Holy Doors leading to the altar, chanting and lip-syncing for what would later become a music video in which they pleaded with the Virgin Mary to rid Russia of Putin. Now that’s music theater:

So Pussy Riot is off to prison to serve a two year sentence for acting as “hooligans” in a sacred space. Like Ai Wei Wei, these frightened totalitarian regimes think they can put artist activists in jail to squelch opposition, but how they can be so blind as to not see waves of outrage rippling at nano speed through the social media? If this had happened even ten years ago, it would have taken weeks, if not months for the word to spread. Now it is at the speed of light and the repercussion of this viral blast of support will undoubtedly advance opposition to Putin like nothing else.

That is the power of art, activism, and media at its finest and bravo to Pussy Riot for having the balls and the media savvy to activate this extraordinary spectacle. The Occupy Movement in the US can learn a lot from this ironic twist of exorcism. It’s time to stir up some electronic disturbance towards the Gods of the Tea Party.