… it was an overlapping, meeting ground, a liminal zone … an “electronic circus,” … a coming together, a unification of bodies and spirits that mutated out in all kinds of new directions. – Michael J. Kramer, Inside Outside: On the Significance of the Trips Festival

There was a seismic moment in the 1960s when the confluences of new media art, psychedelia, Happenings, utopian aspiration, rock and roll, LSD, sonic experimentation, cybernetic communalism, and performance art fused and coalesced into a collective, socially transformative, cultural explosion. The Trips Festival (the culmination of Ken Kesey’s Acid Tests), took place January 21-23, 1966 at Longshoremen’s Hall in San Francisco, just a few short blocks from the unsuspecting tourists of Fisherman’s Wharf, who were most likely oblivious to the extreme forces that were radically altering America’s youth culture in ways that would never, ever be the same again. 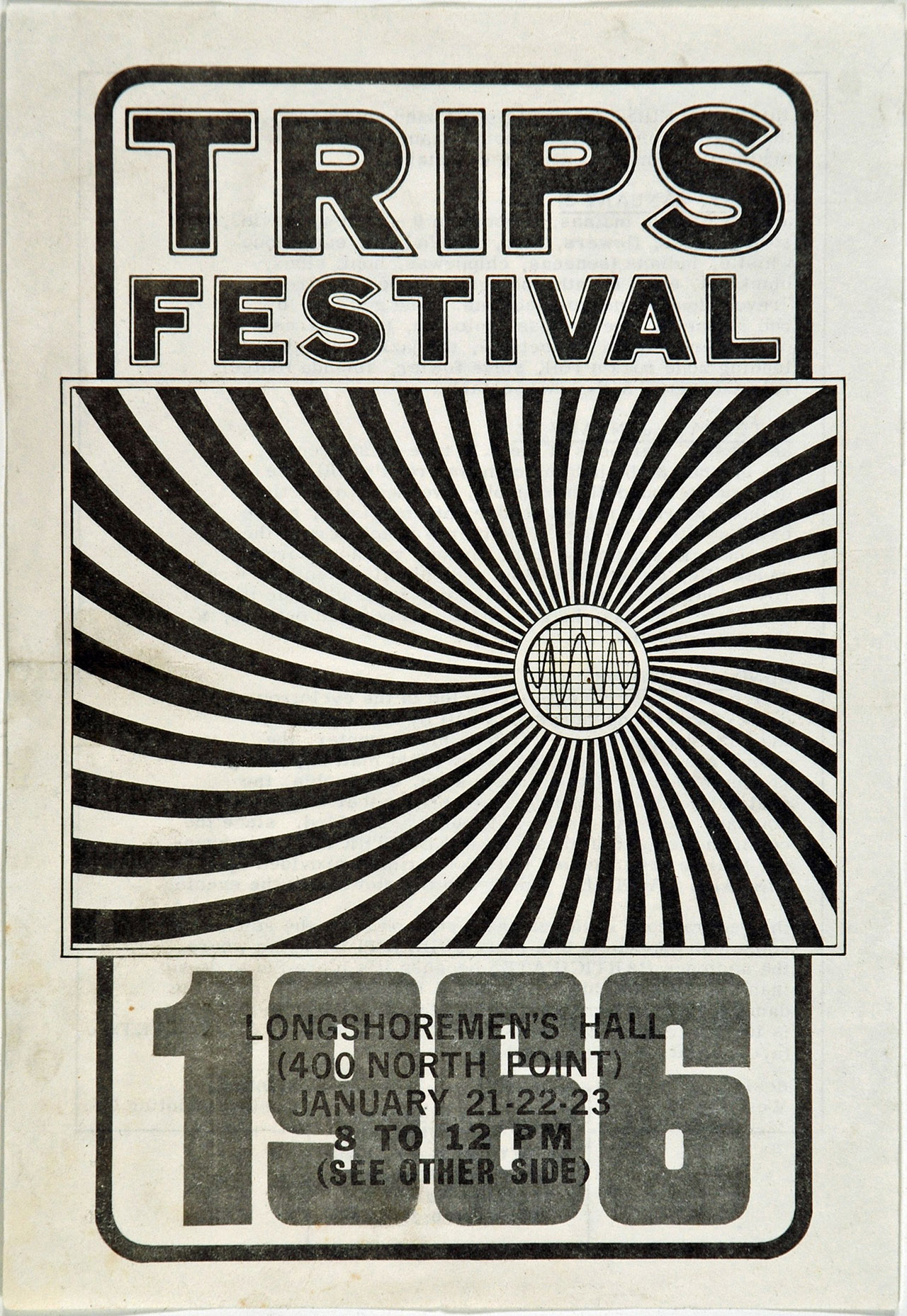 The chief instigators of the Trips Festival were Ken Kesey and his Merry Pranksters, Ramon Sender, and Stewart Brand. The first of this triumvirate of inspired radical thinkers, provocateurs, and artists was the author of One Flew over the Cuckoos Nest (Kesey), whose chief protagonist Randle McMurphy notoriously sacrificed his mental condition to liberate a “merry” band of hapless patients self-incarcerated in a mental ward. McMurphy’s now classic rebellion against the evil Nurse Ratched, was in many ways, Kesey’s narrative for a social revolution and call-to-action to liberate the consciousness of the post World War II baby boom generation coming-of-age: many of whom grew up in the culturally dormant suburban quiet of the 1950s. Prior to the Trips Festival, Kesey and the Pranksters had executed their now legendary 1964 cross-country magic-bus trip across America, a traveling media circus, so eloquently captured in Tom Wolfe’s Electric Kool-Aid Acid Test:

“The bus barrels into the superhighway toll stations and the microphones on top of the bus pick up all the clacking and ringing and the mumbling by the toll-station attendant and the brakes squeaking and the gears shifting, all the sounds of the true America that are screened out everywhere else, it all came amplified back inside the bus, while Hagen’s camera picked up the faces, the faces in Phoenix, the cops, the service-station owners, the stragglers and the strugglers of America, all laboring in their movie, and it was all captured and kept, piling up, inside the bus.”

The Pranksters’ acid-tinged sonic experimentation with its mind-altering variable lag tape manipulation coincided with, or better yet synchronized with, the work at the San Francisco Tape Music Center during the same period of the mid-1960s. The SFTMC was co-founded by composers Morton Subotnick and Ramon Sender, in collaboration with composer Pauline Oliveros, visual artist Tony Martin, and sound engineers Don Buchla and Bill Maginnis. Sender, who would later author several books, as well as participate in the Morning Star Ranch commune in Northern California, was the number two partner-in-crime of the Trips Festival. The association of Kesey and Sender constituted an unusual intersection between the classically trained experimental electronic musicians of the SFTMC, and the Pranksters’ outsider, madly-inspired excursions into a kind of unschooled tape experimentation. Additionally, the San Francisco Tape Music Center was the birthplace of one of the first modular synthesizers, invented by Don Buchla, who was invited to bring his electronic music box into the audio spectacle of the Trips Festival.

The third member of this historic partnership was media artist/researcher/writer/computer visionary Stewart Brand, founder of the counter culture publication Whole Earth Catalogue, and an active participant in the cybernetic and personal computer revolution that was just underway a few miles down the road in Silicon Valley. Brand would later create The Well in the 1980s, the birthplace of one of the first online virtual communities. Prior to the Trips Festival, Brand was associated with the new media art collective USCO (US Company), instrumental in transforming the Happening (audience-participatory performance events) into extravagant celebrations of community, multimedia, strobes, lights, theatrical ecologies, and sound collage: events that what were known as “be-ins,” shattering the arbitrary boundaries between performer and audience and life itself during the 1960s.

And so on and so on…, the alchemical fusion of this all-star consortium initiated a cross-pollination of art, music, media, technology, drugs, radical experimentation, participatory consciousness, tribal community, and unbounded youthful energy that reached a state of nuclear fission at the Trips Festival. However, the Festival was not without precedent: Kesey, Sender, and Brand had all been collectively and independently exploring the various dimensions of expanded artistic, social and environmental consciousness that was stirring even before the 1960s. They had also linked themselves spiritually and artistically to the Beat poets (Allen Ginsberg, William Burroughs, Jack Kerouac, Lawrence Ferlinghetti, and Neal Cassady) who had in the 1950s descended on San Francisco’s North Beach. Cassady in fact, was the hyper-driven speed-induced bus driver for Kesey and the Pranksters, considered the historical connection between the beats and the hippies. Driven by the spirit of the Beats, and other mentors including Buckminster Fuller, John Cage, and Marshall McLuhuan, the Trips Festival morphed into something entirely new, a movement of LSD-infused transcendence, consensual delerium, barely controlled hysteria, and socially participatory experimentation, as though everyone were dreaming the same impossible dream together. 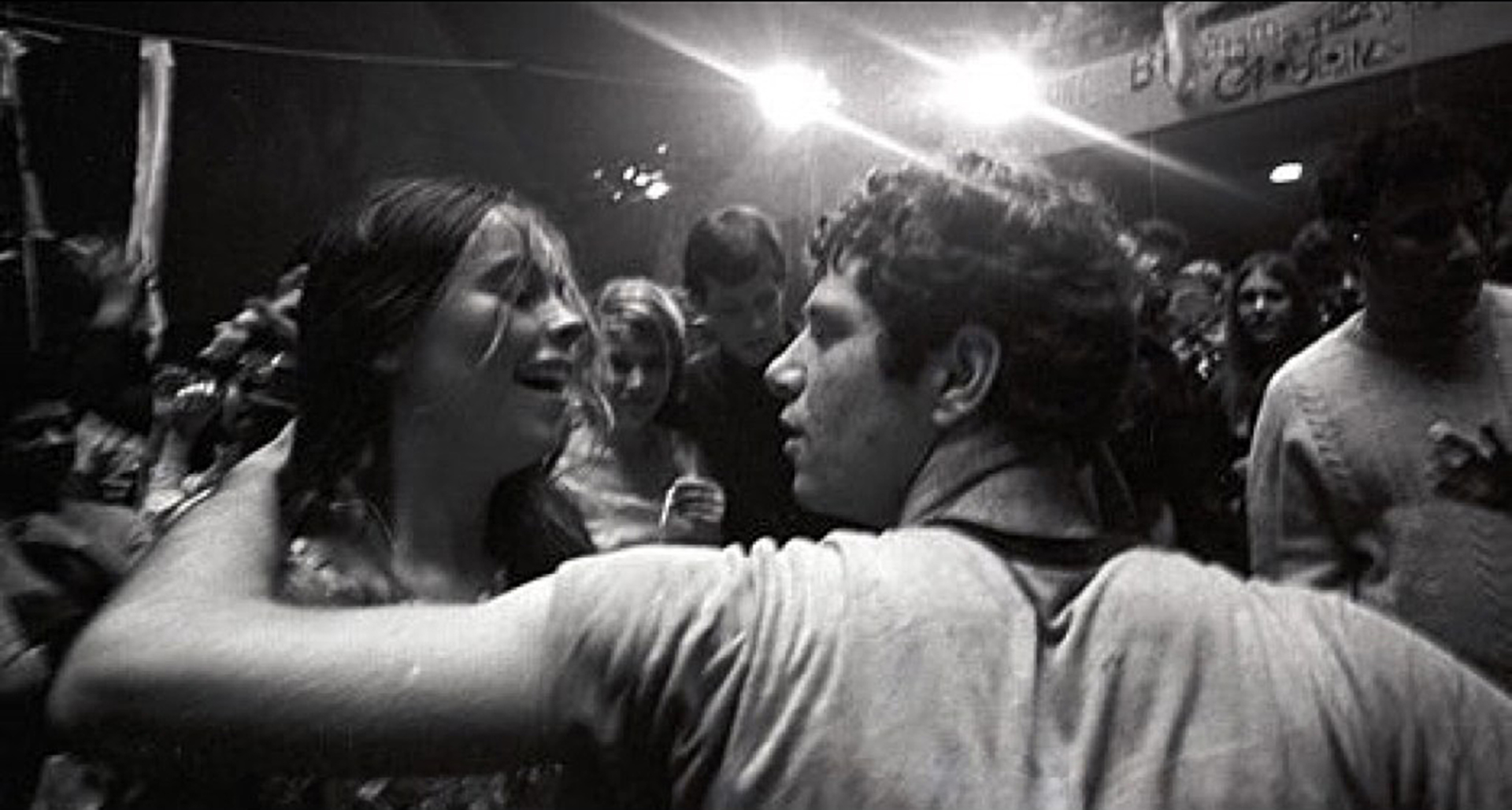 There was an electric current rippling through the crowded space of the cavernous Longshoremen’s Hall, signaling the beginning of a new era: one of total rejection of the status quo. For the Trips Festival was the first publicly visible manifestation of Ken Kesey’s earlier forays into the Acid Tests. These events, which took place at homes and warehouses, were underground social laboratories for LSD experimentation and the kind of hyper-participatory media immersion and manic expressiveness that became the trademark of the Pranksters. The Acid Tests were also the seeding ground for new music that stretched the notion of rock music, improvisatory musical “trips” that meandered through an hallucinatory space and would then often digress into oblivion. The band that formulated the music of the Acid Tests, which came to be called “Acid Rock,” was none other than Jerry Garcia and the Grateful Dead. In collaboration with Owsley Stanley, the LSD chemist, entrepreneur, audio engineer, and creator of the Dead’s “wall of sound”, the Grateful Dead developed a signature style of long-form, trippy solos and sonic experimentation, and so were brought in to perform at the Trips Festival.

The Trips Festival, it seems to me, encapsulated a socially transformative and utterly disruptive moment that changed the course of history in the 1960s as a key catalyst of the counter culture. It brought about a course of action that Gene Youngblood refers to as “leaving the culture without leaving the country,” that is, the formation of what he calls an “autonomous reality community.” For three days, the Trips Festival manifested as its own alternative world, a reality community that establishes its own rules (or lack thereof) and lifestyle.

This brings us back full circle to Kesey’s Randle McMurphy in One Flew Over the Cuckoo’s Nest, who set about to rupture the self-imposed constraints of the mental ward patients, to construct a new reality as a new place for them to go. And like Chief Broom, who ultimately escaped by smashing through the walls of the mental institution, the imagination and high octane instincts of Ken Kesey, Ramon Sender, and Stewart Brand unleashed a new reality that was uncontrollable, irresistible, and marvelously seductive. Well before Burning Man, the Trips Festival was a cultural hurricane that swept everything and everyone in its path, helping to launch an era of flower children, hippies, long hair, androgyny, free sex, free love, and social revolution in the San Francisco Bay Area: a force that would spread far and wide and beyond and around the world in the zeitgeist of the 1960s. Randle McMurphy may have been a fictional character emanating from Ken Kesey’s imagination, but his infectious energy surfaced and exploded in the halls of the Trips Festival.