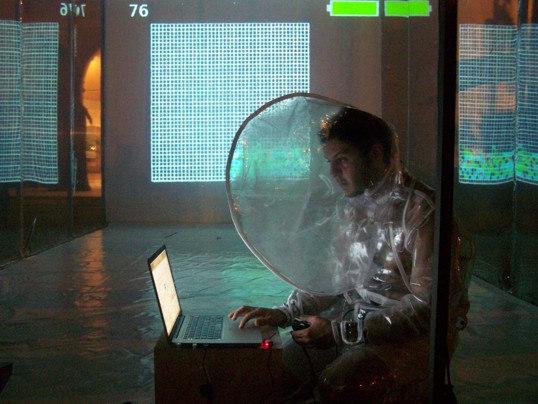 Here in the nation’s capital and across America we have pretty much unlimited freedom as artists: then why we do we so often play it safe? Why hold on to old, dying anachronisms? Why cling to the fickle desires of the marketplace?

In Philip Kennicott’s inspiring article in today’s Washington Post, he writes about Egyptian artists who have abandoned their studios in the post-Mubarek era, taking to the streets to help usher in the new era… now that’s art! The above multimedia performance installation by Ahmed Bassiouny, who died fighting in the demonstrations a few months ago, created this work before he died, (to be shown at the Venice Biennale this year) in which he “attached sensors to his body and used computer manipulation to create a visual parable of kinetic stasis and a metaphor for his three decades of life under Mubarak.”

Now that the revolution is over, Egyptian artist and professor Shady El-Noshokaty has declared: “now is not the time to produce work, it’s time to understand.” This is a great model for what it means to be an artist… anywhere.