As an alum from the California Institute of the Arts during the notorious era of the 1970s, I’ve heard and seen a lot of the infamous war stories. Like, for example, when CalArts President Bob Fitzpatrick was “shot” by Guerrilla terrorists while leaping from their helicopter in the middle of the graduation ceremony, fake blood everywhere. I thought I’d seen and heard it all. But last night, in Open Source Studio, Dylan Fergus (on the right) made a surprise appearance in class via Adobe Connect while flying at 30,000 feet over Arizona: 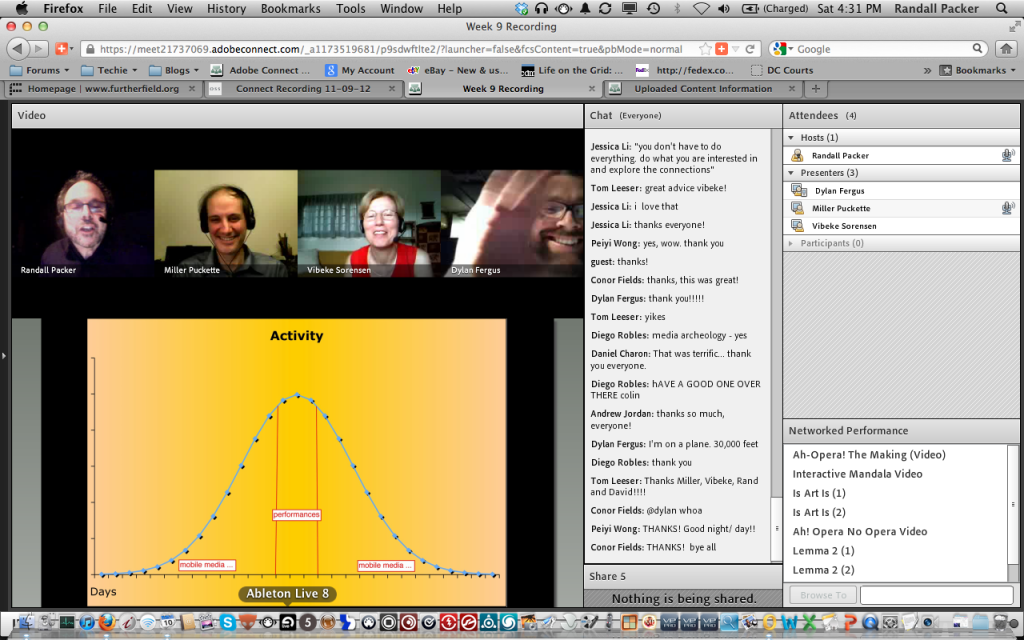 In last night’s session, we hosted Miller Puckette and Vibeke Sorensen, who appear to Dylan’s left, along with Rand Steiger and David Rosenboom. The topic of the conversation was networked performance, with a broad range of discussion concerning the use of telematics for live musical and audio-visual performance. But I’m afraid Dylan upstaged everyone with his high-flying appearance. Whereas the performances from the 1990s were patched together using ISDN lines, in the 21st century, wireless is nearly ubiquitous, with enough bandwidth to turn a smart phone into a supersonic transmitter. Not even altitude gets in the way.

Of course, this is the kind of tactic you would expect from a CalArts student, who find a way to subvert every kind of situation. Who says you can’t attend class from an airplane! In the spirit of the institution that was a dream of Walt Disney, all it takes is a little imagination… “where once upon a time, happens once upon a day.”