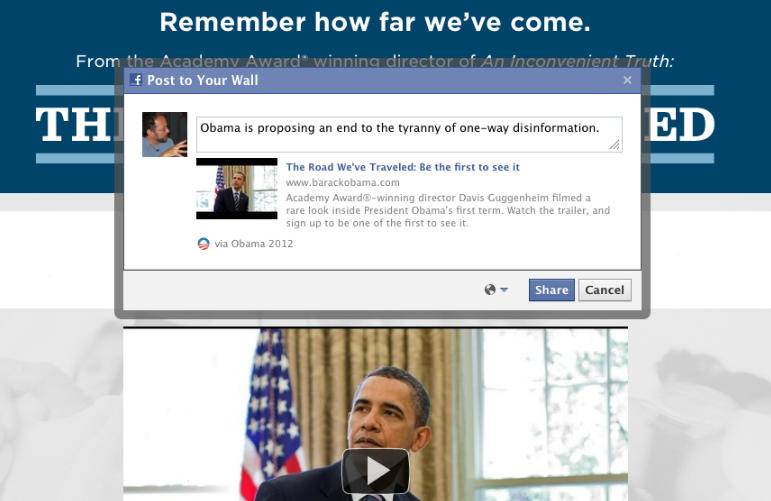 If cultural production in the age of interactive media no longer fits the institutional model, than what is the new model? Even such a massive enterprise as a presidential campaign is revolutionizing the broadcast paradigm, in ways that are unprecedented. Perhaps, just perhaps, the old broadcast medium is truly dead, left to its own devices of delivering tired old propaganda to the masses.

Obama is embarking on something new and radical, in which for the first time, there is a shift to online media as the primary conduit to the people. Rather than consuming propaganda with only the remote control to fight back, or battered by bots via the telephone, the viewer now is encouraged to immediately shift into participatory mode through an interface that invites action. Tonight, Obama launches the “Road We Traveled,” a new ad that looks at a presidency that was teetering on the brink of the abyss just a few short years ago (most everyone has forgotten that by now), but you won’t see it on television (except via news commentary), its being launched on the Web, and that’s where the action is in today’s media.

This is a radical departure from the institutional filters that stand in the way between the cultural producer, political candidate, artist and their public. This new embrace of interactive media (well not so new, except now it is taking center stage), opens a large fissure in the controlling nature of the arbiters of taste: from editors to curators to pundits and on and on. Who needs them when cultural content is only a click away and the viewer has the means for immediate participation in the process. This is radical and political and threatening to the status quo, when institutions lose the ability to hold us hostage to their narrative.

It’s time to write our own stories.