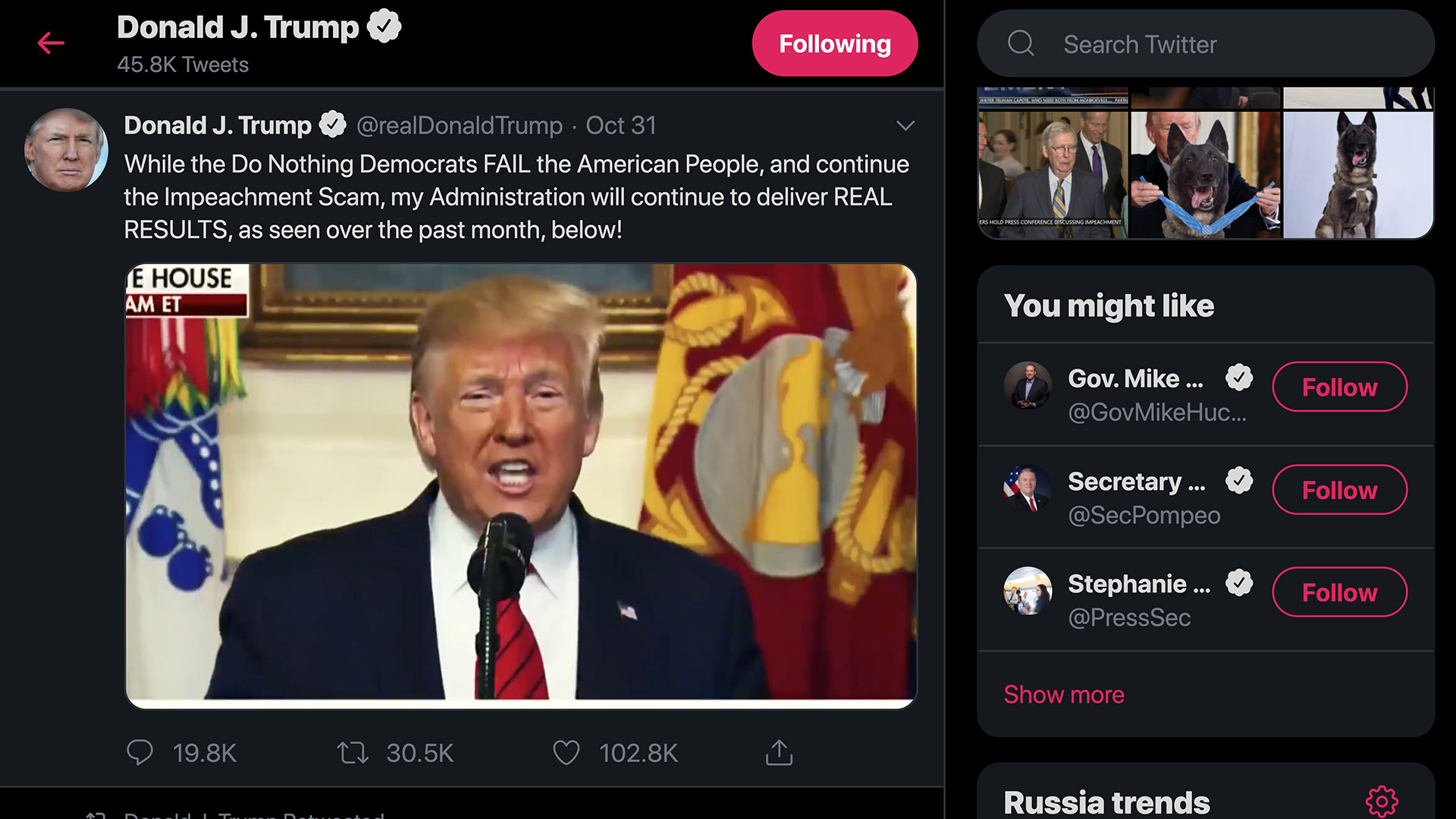 He is a weapon of mass dissemination controlling the Network, launching digital missives that reverberate across the mediascape with thunderous retweets and likes. We are, in fact, losing the information war to a totalitarian who has taken one-way control of social media.

It no longer matters how deep in the swamp he descends, or the extortion he levels against foreign nations, or the dissolution of constitutional norms, or even the blatant crimes against humanity. None of it matters one iota so long as TRUMP owns the Network. And so long as he owns the Network, he is his own Media, his own Broadcast channel, he is the Voice that can’t be shut off.

TRUMP is a one man disinformation war machine, he is a walking press conference, and from a single iPhone, he can alter the news, events, politics, world affairs with the press of a finger. TRUMP is a meme factory, a weaponized force of branding, a virtual torrent of networked performance rants, as he issues Tweet after Tweet that destroys reputations, terrorizes his enemies, besmirches world leaders, ends or starts wars, promotes white supremacy, intimidates cowering Republicans, titillates his base, or showers himself with praise. There is nothing he can’t do with his phone.

If you think that America will eventually come to its senses and wake up to the horror show in the White House, the TRUMPological Twitter Feed will always be there to beat back the normalcy of laws and the constitution. With his over 60 million followers, in addition to ALL the media who echo each and every Tweet out to the rest of the world, TRUMP has our constant, undivided attention. He will with the greatest of ease and defiance, DRIVE US CONSTANTLY CRAZY WITH NOISE AND DISINFORMATION. So long as he can jam the Network, he will control the narrative, he will creep into our heads, until our neurons explode in a galaxy of pixels.

No doubt: Big Brother is Tweeting You. And so long as social media circulates through our collective nervous system, TRUMP will be a looming presence constantly disrupting the order of things. Although 1984 was written in 1948, the dawn of the age of computers, Orwell’s dystopic portrait of media goes well beyond the ubiquity of the Television Broadcast, as a premonition of the frightening implications of what happens when a demagogue takes control of social media.