(If you missed yesterday’s broadcast of Networked Conversations with Robin Bell & Leanne Mella, head over to the Archive.)

It’s 2020, and when have we ever been so immersed in the daily media onslaught of political noise & partisan divisiveness? The narrative flows constantly 24/7 and all we can do is passively absorb the torrent of clashing punditry, White House scandal, Impeachment, etc. etc, ad nauseam. However, there are alternatives. WE ARE THE MEDIA! Yes, we as artists, activists & just plain everyday citizens can take to the Network and shape our own narratives, NOT beholden to the mainstream channels, the politicians, the pundits, left or right. We have the tools, the means, and the where-with-all to decentralize the Broadcast, to conduct what we call social broadcasting, like no other time in history.

It is with this potentiality in mind, that the Third Space Network has resumed its series of Networked Conversations, inviting artists, curators, activists, & audience to comment & debate the unfolding issues from the alternative perspective. There are no corporate sponsors telling us what we can and cannot say, no advertising, no gatekeepers whatsoever, just a desire to engage, participate, and speak out in our live, interactive Crowdcast platform.

Yesterday, the conversation began with media artist Robin Bell’s projected interventions in Washington, DC, a challenge to the power of officialdom in the public space, using the nation’s capital as a canvas for subversive messaging.

Robin is an artist, journalist, activist, and media wizard based here in Washington DC, who has honed his many talents to rally opposition & protest in this government town, with its towering, cold, steely buildings that impose their presence over the urban landscape. We also talked about the histories of artists challenging political & cultural power, including the infamous Robert Mapplethorpe projection by DC artist Rockne Krebs, who defied the closing of the controversial Mapplethorpe exhibition in 1989 at the Corcoran Gallery of Art in Washington with a massive projection of the artist.

The discussion of activist media histories went even further back to the Videofreex, the New York video collective known for creating the first pirate television station in 1972, when they hacked a local tv network in upstate New York to deliver their own programming, their own narratives. The Videofreex were among the early artists and independent media makers to embrace the medium of video, employing the first consumer equipment, the Sony Portapak, to infiltrate & capture the political unrest in the late 1960s & early 1970s.

Leanne Mella, who works as an independent cultural producer and curator in New York, and who formerly was a Visual Arts Specialist for the US Department of State, has a long history of association and collaboration with activist media artists such as the Videofreex. Leanne shared the 2008 exhibition she curated, The Prisoner’s Dilemma, with works by artists such as Jenny Holzer that confronted powerlessness, exclusion, and marginality: demonstrating yet again how artists insert their own message into public spaces.

“The media must be liberated, must be removed from private ownership and commercial sponsorship, must be placed in the service of all humanity.”

This is high aspiration indeed – perhaps a bit of tactical utopianism – but in our own small way, the Third Space Network and our series Networked Conversations is a direct challenge to the Establishment, to revise the dominate narrative of the Media Empire. In the face of 2020: with democracy teetering on the edge, with the post real machinations of XTreme TRUMPology aimed squarely at the guardrails of the constitution, as the incessant Media machine jolts our nervous systems with a bi-polarized supply of dopamine that ultimately dulls the senses, we conclude the absolute NEED to produce our own media, construct our own narratives, to find sanity amidst the information chaos we find ourselves in today.

So stay tuned and Save Your Spot for the next installment of Networked Conversations on Saturday, February 22nd at high noon, with Washington Project for the Arts director Peter Nesbett & performance artist Sheldon Scott. We anticipate an engaging discussion of what it means to challenge the histories & hypocrisies of the dominant narrative with the full impact of the human body. 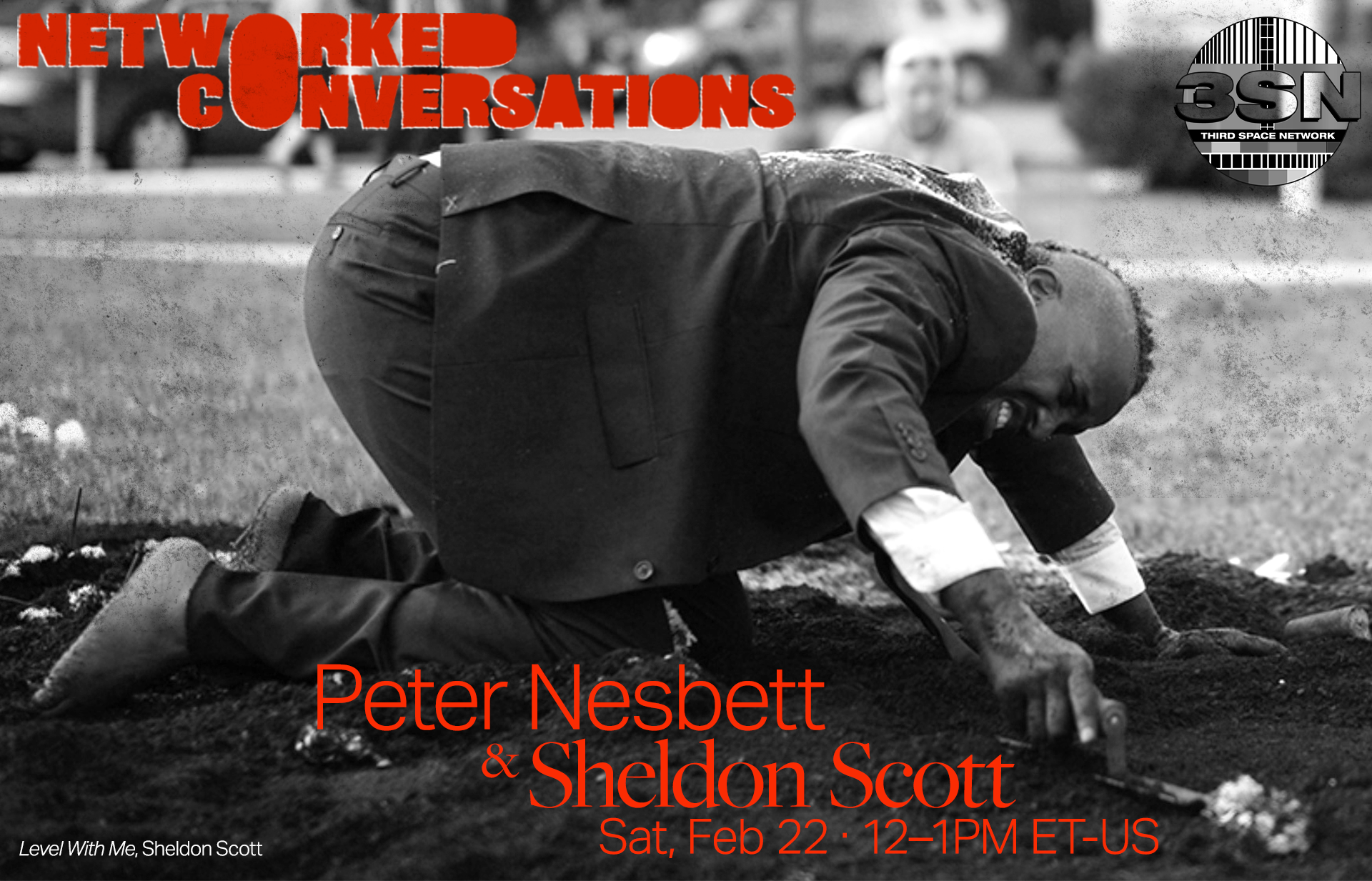